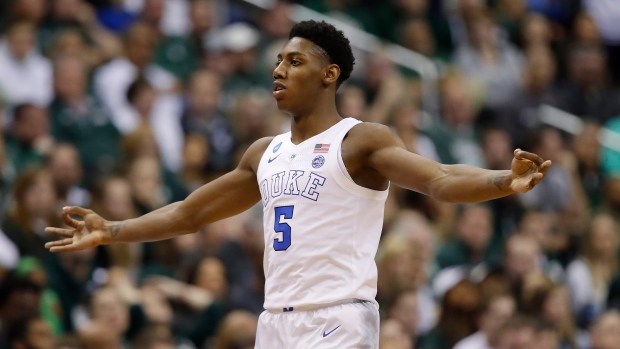 Royal Bank of Canada has attached itself to one of the nation’s top basketball talents, just days before he makes his entrance into the NBA.

RBC announced Tuesday that is has signed a multi-year sponsorship deal with Toronto-born RJ Barrett. The 19-year-old, who spent last season with Duke University, is widely expected to be one of the top three players selected in Thursday’s NBA Draft.

Barrett joins a stable of Canadian athletes already signed on with the bank, including top-five-ranked golfer Brooke Henderson and four-time Olympic medalist Penny Oleksiak, among others.

Including his impending entrance into the NBA, Barrett is also expected to be a key figure in the future of Canadian basketball on the international stage. Barrett helped lead Canada to gold at the 2017 men’s under-19 Basketball World Cup and is expected to be among those tapped to represent Canada at the 2020 Summer Olympics in Tokyo.

"RBC is proud to welcome RJ Barrett to Team RBC as our newest ambassador,” the bank’s vice-president of brand marketing Matt McGlynn said in a statement. “RJ is at an exciting stage of his career with the upcoming 2019 NBA Draft and the Tokyo 2020 Summer Olympic Games qualification, and we are thrilled to help fuel his athletic aspirations, and to join forces on youth-focused community and marketing initiatives."

The Olympics are a key sponsorship initiative for RBC, which has largely foregone partnerships with professional team sports in favour of amateur sports and individual events like the RBC Canadian Open.