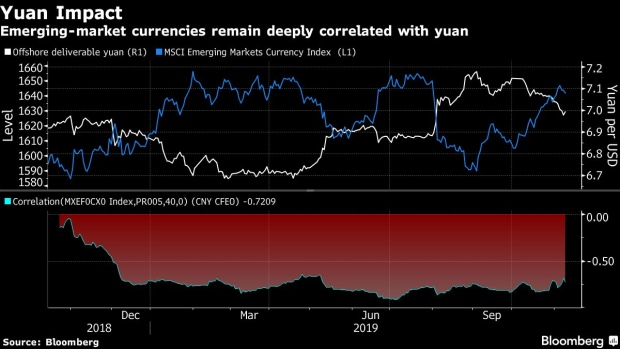 (Bloomberg) -- Sputtering progress toward a trade deal and signs of weakness in the Chinese economy are looming as the biggest threats to the wave of optimism spreading across emerging markets.

Before Friday, developing-nation stocks had touched the highest level since May and currencies held near a three-month high. Then President Donald Trump rattled traders by saying the U.S. hadn’t agreed to a tariff rollback with China, dimming hopes for a preliminary trade deal next month. Beijing wants a deal “much more than I do,” Trump weighed in again on Saturday.

A slew of data is forecast to show weakness spread across China’s economy in October, with production slowing and credit pulling back from a seasonal jump. All of which means the yuan will probably continue to set the tone for trading as its correlation with other emerging-market currencies remains near the record high reached in July. The Chinese currency strengthened past 7 per dollar in its fifth week of gains through Friday, its longest winning streak since February 2018.

“There remains considerable uncertainty about how a phase-one agreement will be secured,” said Mansoor Mohi-uddin, a Singapore-based senior macro strategist at NatWest Markets. “Upside strength in the yuan may also be limited by renewed monetary easing.”

--With assistance from Karl Lester M. Yap and Carolina Wilson.

To contact the reporters on this story: Netty Ismail in Dubai at nismail3@bloomberg.net;Lilian Karunungan in Singapore at lkarunungan@bloomberg.net;Sydney Maki in New York at smaki8@bloomberg.net