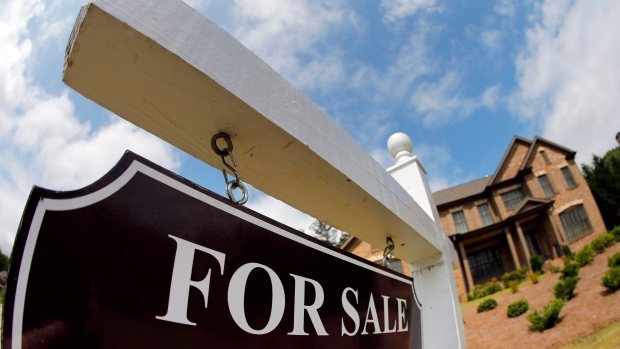 Home for sale , The Canadian Press

New data suggests the rapid decline in Toronto home sales is accelerating, and at least one housing bear sees a Canadian real estate correction of up to 40 per cent coming.

The country’s largest housing market took an abrupt turn from record highs on the heels of Ontario’s 16 measures to cool housing, with sales falling 20 per cent and new listings soaring almost 50 per cent across the Greater Toronto Area in May.

John Pasalis, president and broker at Realosophy, has crunched the early numbers for June and sees a “troubling” plunge in transactions.

“People are just pulling back, it was a really wild swing,” Pasalis told BNN in an interview Monday.

“Who knows where it’s going to go. A lot of this is driven by market psychology.”

Realosophy’s research suggests sales of freehold homes across the Greater Toronto Area are down some 39 per cent so far in June. And for the week ended June 9, sales volumes plummeted 44 per cent compared to the same period in 2016.

When it comes to new listings of freeholds, they rose 34 per cent last week, according to Realosophy.

Pasalis notes the growth rate in new listings has actually been on the decline for the past four weeks, but added in an email that he considers the rapid decline in sales “more troubling than the rise in inventory.”

In the condo market, Realosophy saw a 22 per cent pullback in sales last week and an 11 per cent rise in new listings.

The plunge in June sales was not uniform across the GTA. Realosophy says the drop is more pronounced in outlying communities such as Markham and Richmond Hill – up to 60 per cent year-over-year. The firm’s earlier research suggested heightened speculative behaviour in those communities.

Longstanding housing bear David Madani, senior Canadian economist at Capital Economics, told BNN in an interview Monday that in a “speculative housing bubble, once prices stop going up the whole reason for speculating in the market disappears.”

“It isn’t about interest rates.”

Madani expects sales to continue to weaken as more prospective buyers take a wait-and-see approach, and listings to climb as homeowners look to cash out.

“On that basis I expect prices to continue to decline over the long, long, long term,” said Madani.

“I see a correction of between 20 to 40 per cent in the Canadian housing market - over five years.”