'Tremendous opportunity' in Canada for building a business: Nuvei CEO

In 2017, Nuvei Corp. Chief Executive Officer Philip Fayer faced a dilemma: he was in talks to sell his payments company to a competitor when Canadian private-equity firm Novacap Management Inc. approached him to invest.

The first option was more lucrative, but had him worried about the future of the Montreal-based business he’d created 14 years earlier. He went with the second, which gave him much needed runway to continue an expansion into e-commerce, especially as it also brought Quebec’s $333 billion pension fund on board.

“Often times entrepreneurs are on an island, you’re there by yourself fighting the fight,” Fayer said in an interview Wednesday. “I should have done this years before, finding really good partners” to help grow the business.

Novacap, with Caisse de depot et placement du Quebec, ended up buying a controlling stake, valuing Nuvei at about $525 million. Three years later and a few days into its trading debut, the company is worth more than $6.5 billion.

Buoyed by investors’ appetite for tech stocks during the pandemic, it joined a small but growing club of publicly traded Canadian tech companies worth more than C$1 billion, dominated by e-commerce giant Shopify Inc., which has a market value of almost $150 billion.

Nuvei raised $805 million in its initial public offering -- $730 million for the company and $75 million for Novacap. It’s planning to use the cash to continue a long history of acquisitions, expand its clients base in Europe and North America, and take advantage of online markets that are getting legalized across the world, such as sports betting and gaming.

The stock, which started trading last week, is up 47 per cent.

Potential demand is dizzying. According to Nuvei’s prospectus, global online and mobile retail sales could increase to $6.3 trillion by 2024. The regulated online gaming market -- casinos and betting -- could surpass $174 billion by 2027, while social gaming is already seen reaching $159 billion this year. Payment companies are lining up to capture a fraction of these markets, typically through fees. 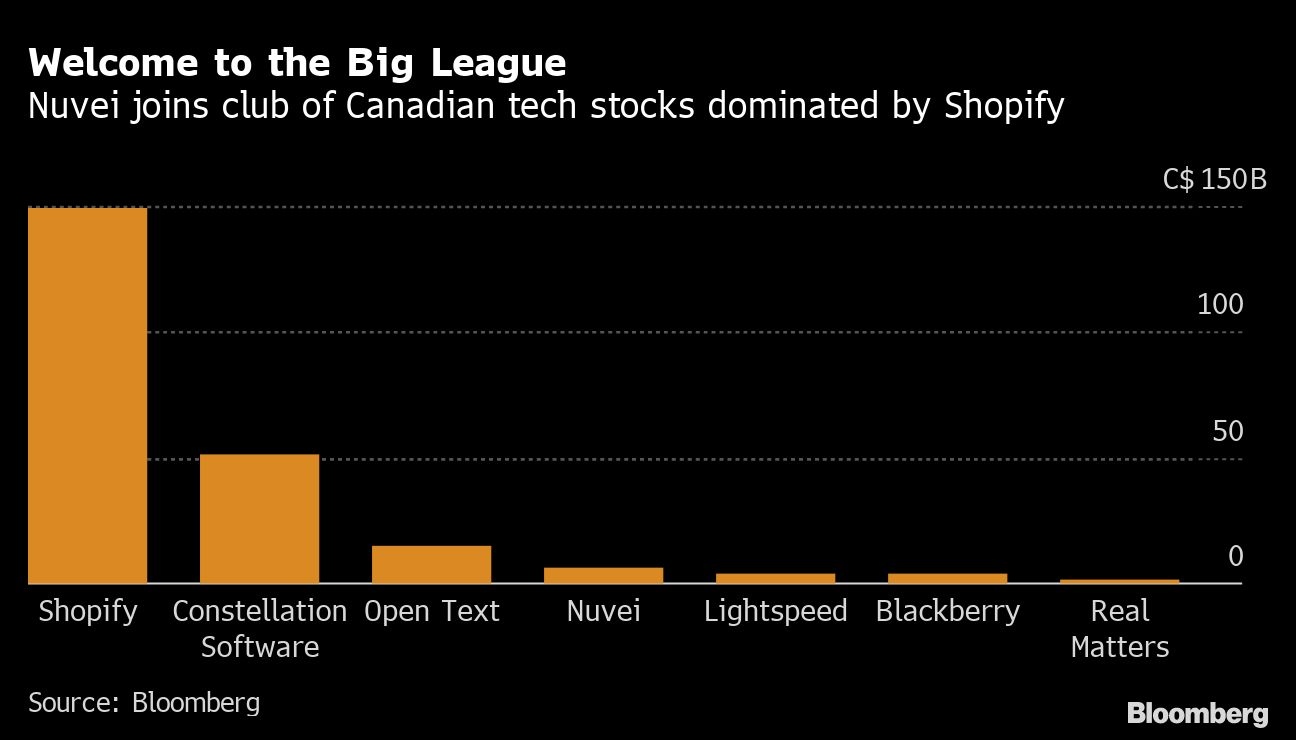 Nuvei, which has more than 50,000 clients and 800 employees, offers several of the services involved in a transaction--an act that appears quick and easy to a shopper but can require a myriad of intermediaries, not just banks and credit cards.

Participants, for instance, include gateways, whose software helps merchants accept card payments, and acquirers, which are involved in clearing and settling a transaction. Currency management and fraud prevention spawn separate services.

Nuvei combines several of these into one platform. Customers can accept payments in about 150 currencies, from 450 alternative payment methods such as Apple Pay and WeChat. They can pick and choose to create a bespoke package of options.

“Sometimes the customer will say ‘Nuvei, I only need you in Mexico,’ and that’s OK,” Fayer said.

A Montreal-native, Fayer says his fascination with payments goes back to the 1990s, and EBay Inc. The auction site was in its early days and buyers and sellers, who had no safe way to transact, had a hard time trusting each other.

After some early entrepreneurial efforts in the space, he founded Nuvei, then called Pivotal Payments, in 2003. Focused at first on small retailers and restaurants, the company in 2015 shifted its efforts to e-commerce, which now accounts for 71 per cent of its clients’ $35.3 billion worth of annual transactions.

Nuvei generated revenue of $245.8 million and adjusted earnings before interest, taxes, depreciation and amortization of $87.2 million for fiscal 2019, according to its filing. The surge of online purchases during the coronavirus crisis made it a prime candidate to go public.

Novacap, which along with related entities invested close to $350 million in Nuvei over the past three years, said it’s sticking around to accompany its growth plan after selling a small portion of its holdings. The IPO was the biggest in which it’s ever been involved.

David Lewin, a senior partner at Novacap who sits on Nuvei’s board, says the payments company adds to recent Canadian success stories he hopes will inspire CEOs reaching the same crossroads Fayer once faced.

“If you want to build a multi billion dollar business out of Montreal, with strong Canadian partners, you can actually do it,” he said in an interview. “Now the proof is in the pudding.”