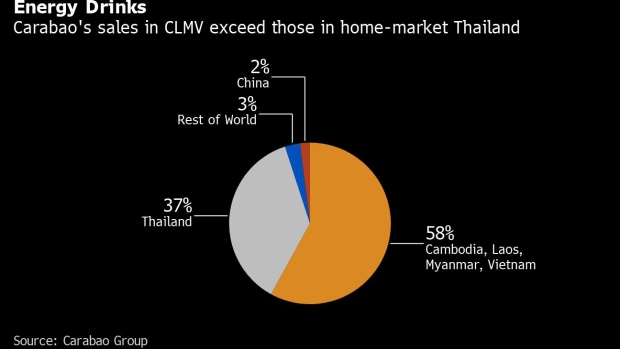 Rising demand in nearby Cambodia and Myanmar will help the company achieve revenue growth of about 20% in 2020, said Managing Director Nutchamai Thanombooncharoen. Carabao is spending 700 million baht ($23 million) to boost production of cans and glass bottles used in overseas markets, she said.

Carabao and rivals Osotspa Pcl, the best-seller in Thailand -- along with the local bottler of Red Bull beverages, have stepped up their competition outside of Thailand, where the economy is poised for its biggest contraction in more than two decades.

“It has been a difficult time because the pandemic has posed enormous risks to both our production and sales,” Nutchamai said in an interview Thursday. “But the outlook is showing much improvement with more businesses reopening and consumer demand recovering.”

About 58% of Carabao’s sales in the first quarter were in the CLMV countries: Cambodia, Laos, Myanmar and Vietnam, according to a company report.

Its share of Thailand’s energy-drink market in 2019 was 30%, compared to 13% for Red Bull’s local version, according to Euromonitor International.

“Revenue growth this year will probably miss the company’s target because of slowing demand in the domestic market,” said Pannawitch Ritthasirhinan, an analyst at ASL Securities Co. Weak markets in China and U.K. will also weigh on the company’s growth efforts, he said.

Net income in the January-March period climbed 91% from a year earlier, to 800 million baht. The company’s shares have risen 8.6% this year compared with a 12% slide in Thailand’s benchmark SET Index.

Nutchamai, Sathien Setthasit and Yuenyong Opakul, lead singer of a popular Thai rock band called Carabao, are the company’s main founders. The name Carabao comes from the Filipino word for buffalo. Nutchamai’s 21% stake is valued at about $658 million, while Sathien holds 32%, according to data compiled by Bloomberg and company filings.

Here are more details from the interview: