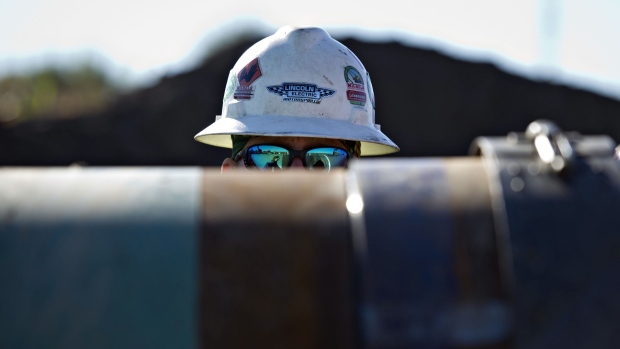 A Michels Corp. contractor watches as two sections of pipe are prepped for welding during construction of the Flanagan South crude oil pipeline outside Goodfield, Illinois, U.S., on Tuesday, Oct. 8, 2013. The approximately 600-mile, 36-inch crude oil pipeline is being constructed by Enbridge Energy Co., a subsidiary of Enbridge Inc., Canada's largest oil transporter, and will originate in Flanagan, Illinois and terminate in Cushing, Oklahoma. , Daniel Acker/Bloomberg

Enbridge Inc.’s proposal to keep its massive Mainline oil pipeline network full through long-term contracts was rejected by Canada’s top energy regulator in a win for some producers who want more flexibility to ship their crude.

“Mainline contracting would likely reduce the access to pipeline capacity realistically available to certain shippers,” the Canada Energy Regulator said in its ruling Friday. “The package of tolls, terms and conditions in the service offering would result in a distribution of benefits and negative impacts that is uneven and disproportionate.”

The decision deals a blow to North America’s largest pipeline company as it upgrades a vast system that ships more than 3 million barrels of crude a day from Alberta to the U.S. Midwest and Gulf Coast, as well as Ontario and Quebec. The network includes the Line 3 and Line 5 conduits that have faced opposition in the U.S.

Enbridge argued that the current system allowing producers to decide the volumes they want to ship each month, without firm commitments, puts it in a disadvantage to rivals.

While producers such as Canadian Natural Resources Ltd. said they feared Enbridge could abuse its market power, others including BP Plc and Exxon Mobil Corp.’s Imperial Oil supported long-term contracts.

Enbridge had sought to reserve as much as 90 per cent of capacity on its Mainline system to refiners and producers that sign contracts for as long as 20 years.

The company’s proposed tolling method, giving those with longer-term contracts and more volume a bigger discount, was also rejected by the regulator because it would “excessively favor shippers that signed long-term contracts,” according to the decision.

In regulatory hearings last spring, Enbridge argued that, without long-term contracts, the system could lose volumes to competitors. The Trans Mountain expansion project and TC Energy Corp.’s existing Keystone pipeline offer most capacity to shippers with contracts, requiring them to pay a regular fee regardless of whether they use it or not.

Other companies that opposed the change to contracted volumes include oil-sands producers MEG Energy Corp. and Athabasca Oil Corp.

Enbridge is worth more than US$80 billion, about US$30 billion ahead of its largest U.S. rival, Enterprise Products Partners LP.

U.S.-traded shares of Enbridge fell in after-hours trading on a day of reduced liquidity following the Thanksgiving holiday. They were 0.5 per cent down from the close, at US$38.77, as of 4:51 p.m. in New York.