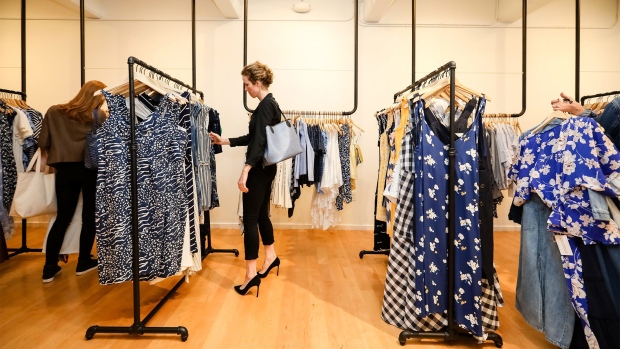 (Bloomberg) -- Rent the Runway Inc. rose as much as 18% in its trading debut after an upsized initial public offering, capping its valuation rebound from the slippage brought on by the coronavirus pandemic.

Accounting for employee stock options and similar holdings, the company has a fully diluted value of more than $1.66 billion. That compares with a valuation of $870 million after a funding round completed in April, according to data provider PitchBook.

Rent the Runway sold 17 million shares Tuesday after marketing 15 million of them for $18 to $21.

The New York-based company struggled to grow through the pandemic as lockdowns gave people little reason to dress up. The spread of the Covid-19 Delta variant and ongoing work-from-home trends have had minimal impact on its business and financial performance, the company said.

While the company’s losses persisted, its subscription numbers increased. Its active subscribers more than doubled since Feb. 1 to almost 112,000 as of Sept. 30, according to the prospectus.

Founded by Jennifer Hyman and Jenny Fleiss, Rent the Runway was among the retail pioneers of what has been called the rentership society. The company now has more competition in the U.S., though, including from platforms such as Nuuly and Style Lend.

The rent-what-you-wear business model appeals to customers with tighter budgets who are eager to access high fashion they wouldn’t otherwise be able to afford. Wealthier shoppers also like it because it offers them more wardrobe variety and the chance to check out new brands. The services are particularly popular in big cities such as New York where closet space is often at a premium.

Subscribers pay monthly membership fees that range from a base of $89 to $199 to rent fashionable and casual attire, accessories and other items for galas, weddings or business events that would cost several hundred dollars and more to own.

Rent the Runway offers hundreds of brands. Shoppers can return those items and then order more or they can buy the products at a discount to the original price. Rentals trended toward less formal in August and September, with items for casual events accounting for about half of customer uses.

More than 80% of Rent the Runway’s revenue comes from subscribers, notes Sanford C. Bernstein analyst Luca Solca. While many have stuck with the company, some members have paused their subscriptions.

“Assuming Rent the Runway can continue to increase its (relatively small) base of subscribers,” Solca wrote in a research note, “this should in theory allow RTR to leverage its cost base and move to profit in the future.”

The IPO is being led by Goldman Sachs Group Inc., Morgan Stanley and Barclays Plc. The shares are trading on the Nasdaq Global Select Market under the symbol RENT.