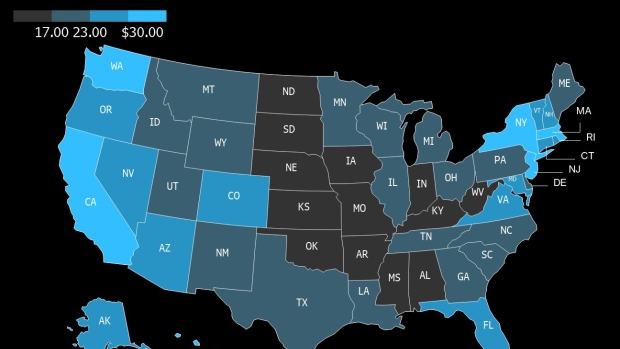 In California, workers would have to earn $39.01 hourly to afford a two-bedroom home, according to a report by advocacy group National Low Income Housing Coalition. , Bloomberg

(Bloomberg) -- Affordable housing is becoming more and more precarious as rents keep climbing at a record pace, and wages for many Americans aren’t keeping up with inflation.

The average worker on a 40-hour week would need to earn $21.25 an hour to afford a one-bedroom home in the US, and $25.82 to afford a two-bedroom home, according to a new report from the National Low Income Housing Coalition, an advocacy group. In every state in the US, the cost to rent a home exceeds their minimum wage.

In Arkansas, for instance, workers would need to earn $14.89 an hour to afford a two-bedroom home, but the state doesn’t have a minimum-wage law, so its workers make the federal minimum wage of $7.25.

Even while California and other states across the country have raised minimum wages, “The cost of housing continues to far outpace income growth,” said Representative Maxine Waters, a Democrat from California and the Chairwoman of the US House Committee on Financial Services. “It is unconscionable for this country, with the resources that it has, to ignore the housing crisis in America.”

While rent remains financially out of reach for many Americans, it is still more affordable to rent than buy a home.