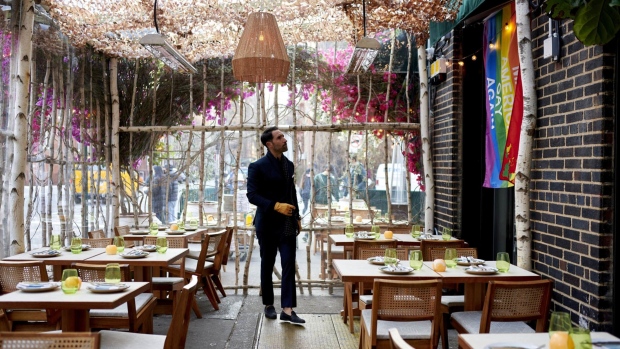 (Bloomberg) -- Now that summer is ending, the question of outdoor dining in permanent structures is top of mind for many restaurant owners in the Big Apple.

More than 11,800 restaurants have taken advantage of the city’s Open Restaurants Program, offering dining on streets, sidewalks—or both—throughout the five boroughs. Earlier this year, Mayor Bill de Blasio proposed an amendment that would make the program permanent, by removing restrictions on the placement of outdoor cafes. The current Open Restaurant program expires at the end of 2022, when New York is slated to begin accepting applications for permanent structures.

As the weather cools, however, many in the restaurant industry are reminded of the darkest times last winter, when keeping the doors open was difficult if not impossible. “The focus now must be on developing a permanent outdoor dining program,” says Andrew Rigie, executive director of the New York City Hospitality Alliance, “so restaurants can transition out of the temporary emergency program that was created quickly in response to the pandemic.”

Outdoor dining represents a major investment at a time when restaurants’ operating margins are thinner than ever. Building even a simple structure is about a $25,000 proposition, and other costs quickly add up. Cobi Levy, co-owner of Lola Taverna in SoHo, has spent $180,000 on his elaborate outdoor dining space, “between the structure, heaters, flowers, and blankets.” Levy says the structures will help keep him going into the future, while creating the kind of street ambience that makes European cities attractive to tourists. “Everyone needs more seats. Unless it’s freezing cold we can sell them,” he says. “Imagine Venice and Rome with New York’s old rules of outdoor dining.”

Andrew Carmellini, co-founder of NoHo Hospitality Group, whose restaurants include staples Lafayette and Locanda Verde, has spent $250,000 on outdoor dining structures for his five restaurants. He calls them “a huge lifeline” given the uncertainty surrounding the business.

Outdoor dining also represents a source of jobs for the industry at a time when the city’s unemployment rate—which was 10.2% in August—is almost double the national rate of 5.2%. On average, for every 10 outdoor tables, a restaurant will hire two servers and one busser, according to Roni Mazumdar, co-founder of the Unapologetic Foods restaurant empire. At Cote, a Korean steakhouse, owner Simon Kim estimates he’s been able to hire 12 more front-of-house and kitchen employees to serve his outdoor dining area, which he spent more than $62,000 to build.

“Outdoor dining saved thousands and thousands of restaurants throughout the pandemic,”  says Rigie of the Hospitality Alliance. “It is credited with hiring back 100,000 people.”

The al fresco structures have also provided an option for unvaccinated restaurant goers, since proof of vaccination is required for indoor dining in New York. The alternative didn’t help at Carmine’s in Times Square in mid-September, when some women from Texas were arrested for attacking a host during a dispute about the inoculation status of those in their party.

There’s also an increased threat to the safety of outdoor diners: There have been armed robberies on Melrose Avenue in Los Angeles, and a man was shot in the leg while eating outdoors at Philippe on Manhattan’s Upper East Side.

Meanwhile, many neighborhood groups have complained about the noisy atmosphere outdoor dining creates, especially in areas like the Lower East Side and SoHo where the diners are younger and the hours can go later. It’s an “open-air nightclub, Wild West atmosphere,” Diem Body, founder of the L.E.S. community group, told the N.Y. Times.

But for people in the hard-hit restaurant industry, outdoor dining is an overwhelmingly positive benefit. “Permanent outdoor dining structures not only increase dining capacity, they keep safety and employment measures in place for restaurant workers across the city,” says Kiki Louya, executive director of the Restaurant Workers Community Foundation. “Restaurants will be better protected against foreclosure, and employment and income can stabilize,” she says. “It’s important to equate permanent structures with permanent solutions.”