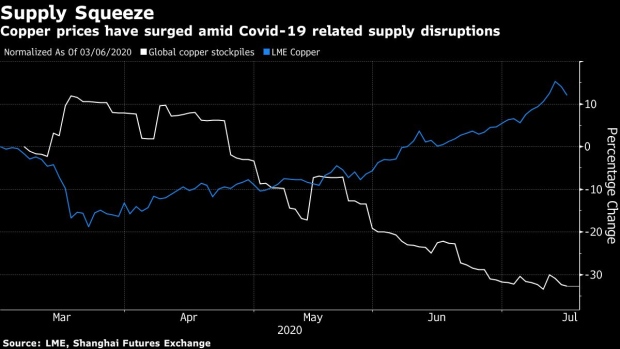 An uneven global recovery from the coronavirus pandemic and concern over the prospects for second waves of infections are weighing on the outlook across commodities markets, according to Rio Tinto Group.

While demand is strong in China, the top raw materials consumer, the U.S. copper market remains weak, the aluminum sector is being challenged by sluggish auto sales and there’s likely to be a muted rebound in Europe and Japan even as they ease virus curbs, the world’s No. 2 miner said Friday.

“If I look at the Chinese situation, the recovery is well underway,” and the country is experiencing a V-shaped rebound, supporting iron ore and bauxite, Rio’s Chief Executive Officer Jean-Sebastien Jacques said in a phone interview.

“I’m not quite sure on what letter of the alphabet I should pick for the other countries,” he said. “We are starting to see some signs of recovery in construction and automotive in the U.S. and in Europe, but it is slow.”

A second wave of infections remains a key threat for advanced economies, according to Rio, which this month announced the closure of a loss-making aluminum smelter in New Zealand and said Friday the future of another operation in Iceland remains under review.

“The uncertainty in the marketplace is because there is no doubt -- it’s not a question of if, it’s a question of when -- we will have a second wave of Covid-19,” Jacques said, speaking from Cape York in northern Queensland, where he was making his first visit to an operation in four months as travel curbs ease in some parts of Australia.

Rio warned that the global copper supply crunch could worsen, with disruptions related to Covid-19 that have impacted about 3% to 4% of annual supply so far potentially increasing further. The company reported its own production of the metal fell 3% in the second-quarter.

Prices have surged as key global sites curtailed activities or operated at reduced rates as virus cases accelerated among their workforces, though there are now signs that Chile -- the top producing nation -- is slowing the rate of new infections. Quarterly output at Escondida, the world’s biggest mine, increased 2% from a year ago, even with reduced staffing levels, Rio said.

Iron ore demand remains strong in China, and Rio said it is adding new customers through port-side sales. The company is also progressing the Simandou mine project in Guinea, and China-based design institutes are updating designs for a trans-Guinean rail line and assessing shipping methods.

The producer said it has implemented new controls following the destruction of ancient Aboriginal heritage sites in May to make way for an iron ore mine expansion. It’s an issue that prompted concern among investors, and could impact future mine approvals in Australia, Goldman Sachs Group Inc. said this month.

“We will learn from it in order to make sure it doesn’t happen again,” Jacques said in the interview. “Today, there are still a lot of questions, and we don’t have all the answers.”