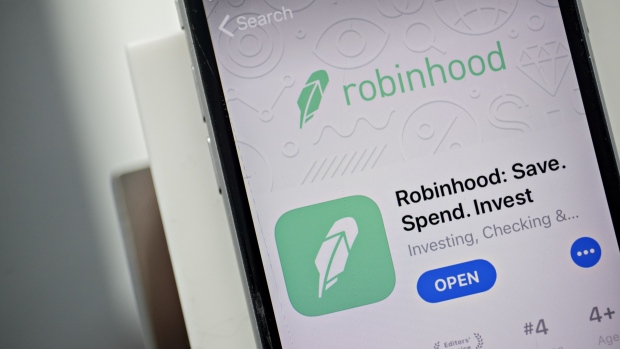 The Robinhood application is displayed in the App Store on an Apple Inc. iPhone in an arranged photograph taken in Washington, D.C., U.S., on Friday, Dec. 14, 2018. , Andrew Harrer/Bloomberg

But the image of the investing app’s clients spending their days loading up on fad stocks doesn’t accord with reality, according to a new working paper published by the National Bureau of Economic Research titled, “Retail Raw: Wisdom of the Robinhood Crowd and the Covid Crisis.” Rather, it seems, the typical Robinhood user’s portfolio is kind of boring, and evidence shows these small traders helped stabilize markets during the COVID-19 crash.

“The RH actual crowd portfolio (ARH) was not as crazy as these ‘anecdotal holdings’ would suggest,” writes Ivo Welch, a finance professor at UCLA’s Anderson School of Management and the author of the report. “Instead, most of the holding interest of RH investors revolved around larger and highly liquid firms.”

The study builds on a growing suite of research that attempts to analyze the psyche of small retail traders and the role they play in markets. Individuals now account for 20 per cent of equity trading, according to a Bloomberg Intelligence analysis, making them impossible to ignore.

Their presence has exploded since brokerages cut fees to zero about a year ago and lockdowns forced people to stay home with little to do. Recent research from academics theorizes that every dollar invested by individuals sways markets by five times that amount. On Wall Street, professionals have taken to Twitter.com and Reddit threads to understand how retail traders invest.

Welch -- after downloading extensive stock data from the trading aggregator Robintrack.net -- found that while it’s true that Robinhood investors have been attracted to “some rather odd stocks,” that doesn’t mean these risky shares are Robinhood users’ most important holdings. Instead, the average Robinhood portfolio “was a lot more ordinary,” he writes. (Robintrack, a website that provided updates on retail stock demand using Robinhood’s public application programming interface, was forced to shut in early August after the data feed was cut).

By his calculations, measures of trading volume can explain up to 60 per cent of Robinhood investors’ holdings. Stocks with the heaviest weights in the average Robinhood portfolio estimated by Welch include Ford Motor Co., General Electric Co., American Airlines Group Inc. and Walt Disney Co.

“Even though some of the investments in odd small-cap experience stocks were eye-popping, these positions represented a small part of the RH portfolio,” he writes. “They were a storm in a teacup. The big picture happened in larger stocks, typically more familiar to and focused on retail consumers and especially Millennials.”

Welch’s work also shows that a model Robinhood equity portfolio has outperformed this year, and the presence of individual investors has possibly acted as a calming force in an otherwise volatile 2020. Whenever the stock market fell, spikes in retail buying typically occurred as early as the next day. Then, a second surge in equity purchases usually occurred roughly three days after a large market jolt, about the time it takes to complete a cash bank transfer, according to Welch. 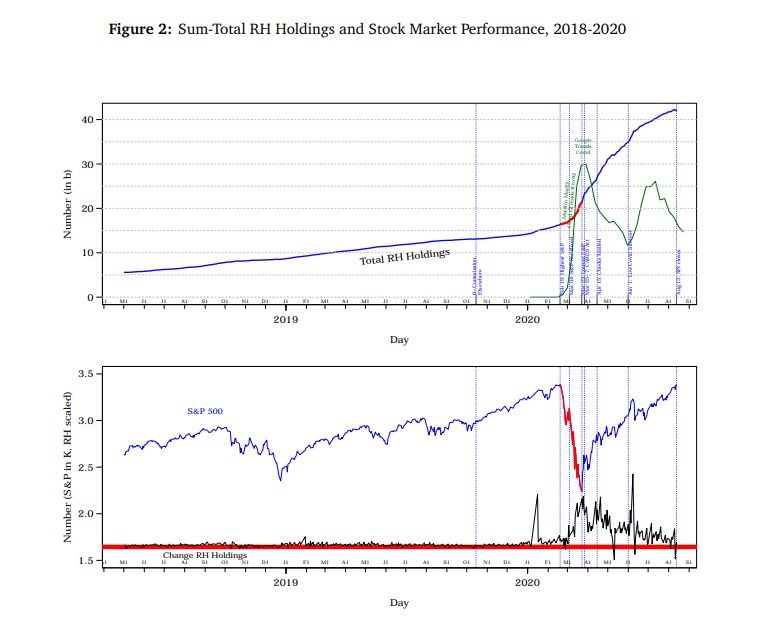 “It appears that RH investors served a small but active market-stabilizing role during the Covid crash,” Welch writes. “In this case (as in the other stock-market crashes in our lifetimes), holding on and/or increasing the position would have paid off well in the subsequent stock.”

To be sure, it’s difficult to extrapolate a generic Robinhood portfolio to every unique retail investor, and Welch admits there are caveats -- among them that few Robinhood users likely hold the widespread portfolio he built as a characterization.

“Instead, individual RH investors are more likely to suffer (or enjoy) diversifiable risk,” he writes. The portfolio “considered in my paper is one feasible portfolio that was investable in-time. Its investment weights summarizes the RH crowd participation in one particular fashion.”