If Competition Bureau loses case against Rogers-Shaw, it will be an indictment of legal system: Competition law expert

The antitrust case against Rogers Communications Inc.’s takeover of a rival is thousands of pages long but comes down to one core idea: the company it’s buying is too good. Analysts don’t see it that way.

Toronto-based Rogers is trying to acquire Shaw Communications Inc. for about $20 billion (US$15.4 billion) in what would be one of the largest mergers in Canadian history. This week, the country’s competition watchdog sued to block the deal, arguing that it would weaken Shaw’s Freedom Mobile division, the country’s fourth-largest wireless provider.

Freedom has been “a strong, independent competitor in Canada’s wireless market -- one that has driven down prices, made data more accessible, and offered innovative services,” Competition Commissioner Matthew Boswell said.

Rogers has agreed to sell the unit and has already lined up a buyer, but Boswell said in court documents that wasn’t an adequate solution. Separated from Shaw, Freedom’s business wouldn’t be as strong, and consumers “are likely to pay higher prices, have less choice and receive lower-quality service,” he wrote.

But while Freedom may be a tough competitor, analysts question how healthy it really is. Shaw is struggling to generate much cash flow from it.

Shaw earned $393 million from wireless on an adjusted basis before interest, taxes, depreciation and amortization in the fiscal year ended Aug. 28. It spent $280 million in capital and would face larger costs in the years ahead to make network improvements for 5G services.

Anthony Lacavera, a telecom entrepreneur who launched Freedom Mobile as Wind Mobile in 2009, says the company will need to invest heavily to keep up with the country’s big three mobile carriers -- Rogers, BCE Inc. and Telus Corp. Whichever company owns Freedom Mobile should expect “no cash flows for the next few years,” Lacavera said in an interview.

The costs of investing in Freedom Mobile were a major factor in the Shaw family’s decision last year to sell the entire company to Rogers, according to BMO Capital Markets analyst Tim Casey.

“There is no plan B, in our view,” Casey told clients in a recent note. “We think the company is selling to Rogers based on insufficient returns from their wireless operations even before 5G.” 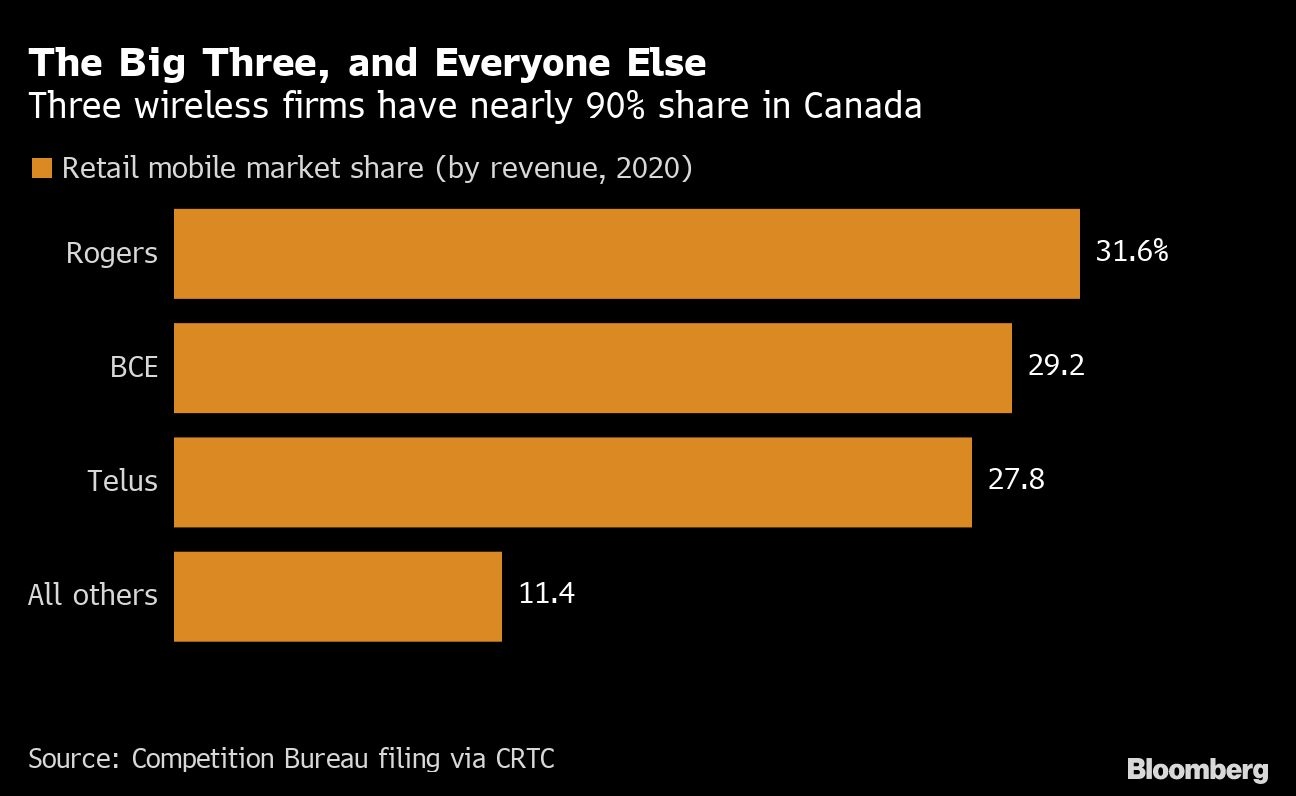 Shaw didn’t participate in an auction of midband spectrum last year, on which telecom companies spent a combined $8.9 billion, and has stayed on the sidelines as Rogers, BCE and Telus launch and promote 5G plans to consumers.

“It’s generally well understood that Freedom must not be allowed to get acquired by one of the Big Three or just disappear. It somehow must persist,” Shine said in a note to clients Wednesday. “Surely, the best solution now is for it to be in new hands. There’s no guarantee that Shaw will continue to invest optimally in wireless or even launch a standalone 5G network.”

Through a spokesperson, Boswell declined an interview request.

Rogers has cut a deal to sell the business to Xplornet Communications Inc. and its controlling shareholder, New York-based Stonepeak Partners LP. It has also opened the door to negotiations with Montreal-based Quebecor Inc., should an Xplornet deal fall through.

Most of Freedom Mobile’s customers are in and around the Toronto region, Canada’s largest city. It also operates in Alberta and British Columbia, where Shaw is a big player in cable television and internet service. But with a smaller network and minuscule marketing budget compared with the three biggest players, Freedom tends to attract less lucrative customers.

Shaw’s average monthly “billing per subscriber unit,” an industry metric known as ABPU, was $37.38 in the quarter ended Feb. 28. Rogers and Telus have blended ABPU of more than $60 and BCE is over $70, according to TD Securities.

The Shaw family “would like to call it quits as an owner of all its telecom assets,” Shine wrote. “How is forcing the family to stay in operation make any sense or be viewed as being in the best interests of Freedom?”