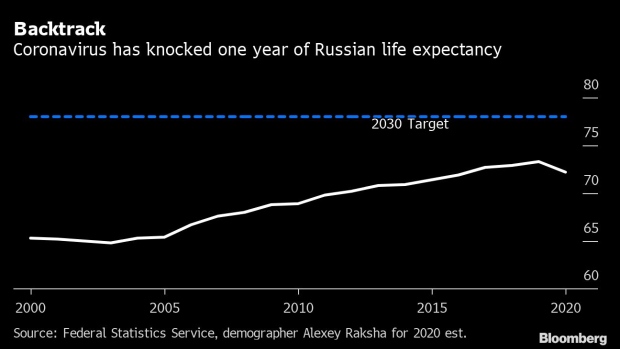 (Bloomberg) -- A former employee of the Kremlin’s statistics agency says Russia’s daily coronavirus mortality figures understate the real toll from the disease in a country where excess deaths could soon be the highest in Europe.

Alexey Raksha worked as a demographic forecaster at the Federal Statistics Service for more than six years until he left in July amid a dispute over the virus data. He says he was asked to leave after he criticized the agency, known as Rosstat, which says he left of his own accord.

The publicly-available statistics on daily mortality rates “need to be multiplied by three,” Raksha, 42, who now runs a one-man demographic consultancy, said in an interview in Moscow. “There is a risk Russia’s excess mortality per capita will be the highest in Europe.”

The latest available official data show that almost 46,000 people who had coronavirus died in Russia between April and August, more than double the total from the daily numbers. Excess deaths for the period are around 115,000, which in proportion to population puts Russia close to Spain and the U.K., the European countries with the highest death tolls, according to Raksha.

Other experts, including from the World Health Organization, have questioned why there is such a big disparity between Russia’s excess deaths and the official virus mortality rate. Part of the problem is that data on total deaths is reported with a one-month lag, though Raksha says it could be made available much sooner.

According to the demographer, data on total deaths is collected daily at Rosstat, but then sent to the government as a classified report. When the statistics are finally released, they are published late on a Friday when fewer people are paying attention.

A spokesman at Rosstat said the agency doesn’t publish the daily numbers because it doesn’t want to spread confusion by releasing raw data that hasn’t been verified. He declined to comment on whether those statistics get sent to the government. The government’s virus-response staff said the time needed for autopsies sometimes delays reporting of the death figures.

The pandemic will reduce average life expectancy in Russia by about a year to 72.3, according to Raksha. President Vladimir Putin’s target of increasing life expectancy to 78 by 2030 is far enough away that it could still be reached, he added.

Anatoly Vishnevsky, a demographics professor and researcher at Moscow’s Higher School of Economics, said Raksha is right to criticize the way the data is released, but said that no one can be 100% sure what the real numbers are.

“I don’t think data related to public health or the death toll should be hidden away,” Raksha said. “It’s a throwback to some of the worst practices of the Soviet Union.”