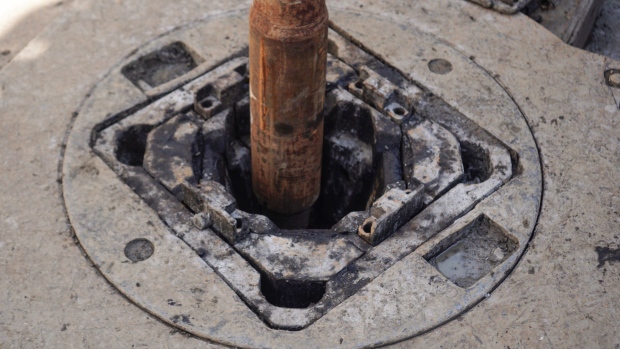 Pipework is positioned on the oil drilling platform at the oil and gas field processing and drilling site operated by Ukrnafta PJSC in Boryslav, Lviv region, Ukraine, on Thursday, July 4, 2019. Ukrnafta co-owner, Naftogaz JSC, the largest gas supplier in the country of 42 million people, is seeking funds to accelerate gas purchases ahead of the heating season and a potential disruption of gas transit by Russia’s Gazprom PJSC from the start of 2020. , Bloomberg

(Bloomberg) -- Russia has earned more money this year from the OPEC+ deal than Saudi Arabia, underscoring how the kingdom has carried a greater share of the burden of production cuts.

Saudi Arabia on average has cut production almost ten times deeper than Russia since the countries joined forces at the end of 2016, according to estimates in the International Energy Agency’s monthly oil market report published on Friday. Yet Riyadh has received just three quarters of the additional financial benefit enjoyed by Moscow, the data show.

Russia has earned an average of $670 million a day in gross crude oil revenues in 2019. That’s $170 million a day more than in the last quarter of 2016, when the Organization of Petroleum Exporting Countries and its partners reached the first production-cuts deal, the IEA said. Saudi Arabia has been earning $630 million every day since the start of the year, up $125 million compared to the fourth quarter of 2016.

While the kingdom has reduced its oil production since the end of 2016, by around 740,000 barrels a day, Russia’s daily output cuts have averaged just 75,000 barrels, according to the Paris-based agency.

Russia and Saudi Arabia have driven close cooperation between OPEC and several other oil-producing nations. Yet while the kingdom has consistently pushed for coordinated output cuts to avert a supply glut, Russian officials have repeatedly taken a more cautious tone, often voicing support for further production cuts only just before the previous agreement expires.

President Vladimir Putin said this week that Saudi Arabia’s call to all OPEC+ members to stick to their production targets under the deal is due to the planned initial public offering of the kingdom’s state-run Saudi Arabian Oil Co. “They have their current interests, and we have to respect that, and this is what we are doing” as part of the OPEC+ cooperation, Putin said.

The production curbs have been weighing on Russia’s economy, which is heavily dependent on revenue from the hydrocarbon and mining industry. The latest cuts running through March 2020 are set to take as much as a half percentage point off Russia’s annual economic growth, according to Goldman Sachs Group Inc. Last year, the nation’s gross domestic product rose by 2.3%.

To contact the editors responsible for this story: James Herron at jherron9@bloomberg.net, Helen Robertson