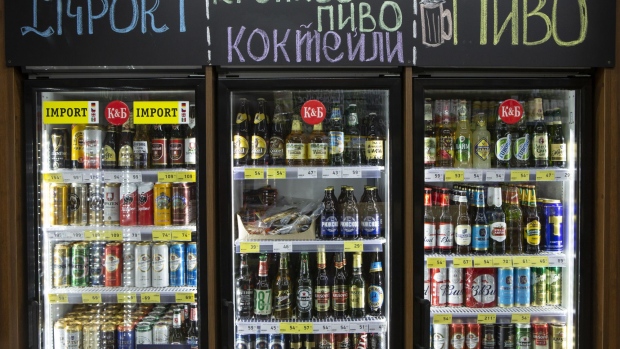 Beers and other alcoholic drinks sit on display in a refrigerator at a Krasnoe & Beloe liquor store in Moscow. , Bloomberg

The holding, which owns the Krasnoe & Beloe and Bristol discounters, has held preliminary meetings with investors, according to people familiar with the situation, who asked not to be identified because the information is not public. Mercury picked banks including JPMorgan, Bank of America Merrill Lynch, VTB, Sberbank and Renaissance Capital for the deal, they said.

Spokespeople for Mercury and the banks declined to comment.

Krasnoe & Beloe and Bristol, which also offer food and tobacco, account for more than half of revenue at Russian alcohol retailers, with combined revenue of 330 billion rubles ($4.5 billion) in the first half, according to Infoline. The stores were about twice as profitable as Russia’s biggest food retailers in the period, according to the researcher.

The company’s owners are seeking a valuation of as much as $20 billion, said one of the people. Russia’s leading food chains Magnit PJSC or X5 Retail Group NV have price to sales ratios of about 0.3, according to data compiled by Bloomberg.

Mercury Retail is planning to go public after it sold its convenience store network Dixy Holding Ltd. to Magnit PJSC for 97 billion rubles in Russia’s biggest deal this year in the food retail market. That deal valued Dixy at about 56% of its 2020 revenue.

New stock listings in Russia this year had the busiest first half since before the annexation of Crimea in 2014 amid a global boom in share sales. Discount retailer Fix Price Group Ltd. raised $1.7 billion in March, the biggest initial public offering of a Russian company in more than a decade.