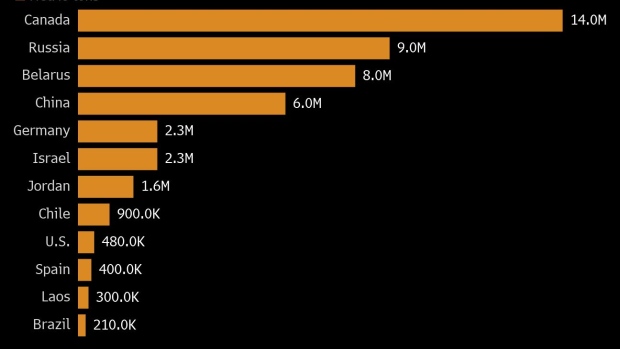 (Bloomberg) -- More price hikes for fertilizer — and consequently, food — are on the horizon as escalating tensions between Russia and Ukraine add to fears of global shortages.

Russia is a low-cost, high-volume global producer for all major fertilizers, and it’s the world’s second-largest producer after Canada of potash, a key nutrient used on major commodity crops and produce. The conflict in the region could disrupt trade flows. U.S.-based Mosaic Co., a major fertilizer producer, warned of shortages in a call with analysts Wednesday.

It all points to rising costs for farmers, who are scaling back on fertilizer use. That will potentially trigger lower crop yields and push prices for food even higher around the world. Food costs are already the most expensive in a decade, according to a United Nations gauge.

In the latest developments, Russia faces the threat of further sanctions following its recognition of two breakaway regions in eastern Ukraine. President Vladimir Putin says he remains open to “diplomatic solutions,” but insists Russia’s interests and security must be guaranteed. Meanwhile, Ukraine said banks and ministry websites suffered another cyberattack Wednesday. Kyiv is seeking to declare a nationwide state of emergency which could see officials impose restrictions on movement for at least 30 days.Fertilizer costs have already been skyrocketing because of high prices for natural gas, an ingredient, in Europe forced some plants there to halt or curtail production. Adding to woes, U.S.-imposed sanctions on a major potash supplier in Belarus in December will affect global supplies.

Canadian producers like Nutrien Ltd., the world’s top crop-nutrient supplier, have the ability to ramp up potash capacity in response and are poised to benefit if the conflict amplifies, according to Matt Arnold, an analyst at Edward Jones. Nutrien said earlier this month it could ramp up potash output if sanctions on Belarus have a long-term impact on global supplies. China and India just penned agreements for supplies with Canada’s Canpotex. South American producers rely heavily on fertilizer imports from Russia.

Still, it remains unclear just how much additional supply companies in North America could make in 2022, Donnelly said. It can take months before new capacity would be available for retail sale. If such projects are not underway now, the tonnages wouldn’t be available until the end of the North American growing season, he said.