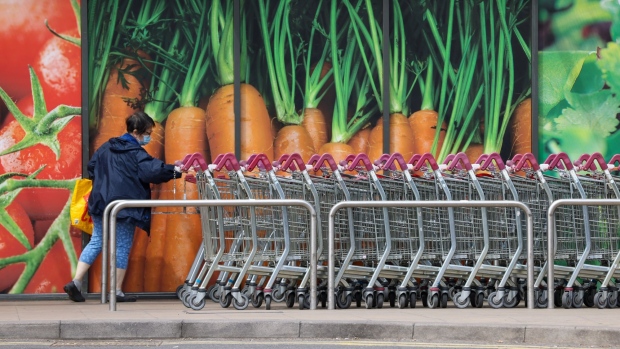 A customer retrieves a shopping trolley outside a J Sainsbury Plc supermarket in London, UK, on Friday, June 24, 2022. The Office for National Statistics said Friday the volume of goods sold in stores and online fell 0.5% in May, as soaring food prices forced consumers to cut back on spending in supermarkets. , Bloomberg

(Bloomberg) -- J Sainsbury Plc said sales are dropping as consumers try to navigate the highest inflation in 40 years and warned that the pressure on household budgets will “intensify over the remainder of the year.”

Britain’s second-largest supermarket chain reported a 4% drop in comparable sales, excluding fuel, in the first quarter, according to a statement Tuesday. Sainsbury stuck to its forecast for the full year of underlying profit before tax of £630 million ($764 million) to £690 million, a decline from last year.

The supermarket said in April that profit will fall as normal shopping habits resume following the end of lockdowns and as consumers feel squeezed by the higher cost of living. Sainsbury, which controls about 15% of the UK grocery market and employs 189,000 people, is making savings across the business so it can invest in lowering prices.

Sainsbury will face a challenge from a group of more than 100 shareholders including HSBC Holdings Plc at its annual general meeting later this week that want the grocer to accredit itself with the Living Wage Foundation, a lobby group, by the middle of next year. If the vote is passed it would mean future pay increases at Sainsbury could have to be in line with the foundation’s assessment of a “real living wage”.

Chief Executive Officer Simon Roberts said that Sainsbury already paid a real living wage to staff and was the first large grocer to do so, according to the statement.

The grocer also said Chief Financial Officer Kevin O’Byrne is stepping down and will be replaced by Blathnaid Bergin, currently the commercial and retail finance director.