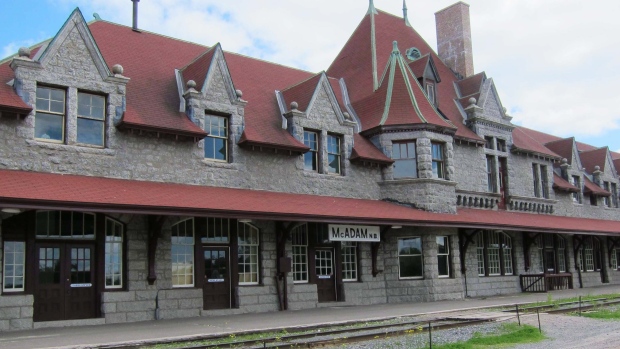 The exterior of the historic railway station in McAdam, N.B., once part of Canadian Pacific Railway's main line into Atlantic Canada, is shown on June 16, 2012. A year after a tiny village in New Brunswick attracted national attention by announcing it would sell 16 housing lots for $1 apiece, the mayor says the novel bid to attract newcomers has been an unqualified success. The Canadian Press/Melanie Patten

MCADAM, N.B. — A year after a tiny village in New Brunswick announced it would sell 16 housing lots for one dollar apiece, the mayor says the novel bid to attract newcomers to McAdam has been an unqualified success.

“It was a great idea,” Ken Stannix said in an interview Tuesday. “But more importantly, it's the ideas and the energy that these new people are bringing to the community and the province as a whole.”

As of this week, 10 of the lots have been sold and the remaining six have deals pending.

With one lot recently cleared for construction, Stannix figures there will be 16 new homes standing on the community's east side within the next three years.

“I think the approach that we took is going to work out for us,” Stannix said, taking a break from decorating the town's historic train station for an annual Christmas event.

In all, more than 600 people applied to buy one of the dirt-cheap lots after they went on the market amid much fanfare in November 2018.

Stannix says the idea for selling lots for less than the price of a cup of coffee was first raised at a meeting in 2012, when it was apparent the village was in decline.

Like many other communities on the East Coast, McAdam couldn't compete with the lure of high-paying jobs in Alberta's oil patch.

“We were bleeding population to the West,” Stannix said.

At the time, Stannix had recently moved back to his hometown with his wife Kate after he retired from a 32-year career in the Canadian military. Soon after he was elected mayor in 2016, the dollar-lot idea started to gain traction.

The village council also moved ahead with an aggressive plan to tear down derelict homes and buildings to improve property values. Of the 25 rundown properties identified, 17 have been flattened.

“As soon as we tore the old houses down, people were buying the ones next to them,” said Stannix, adding that 75 homes have been sold in past three years alone.

During that time, the village's population has grown by 100 to 1,250, and the new dollar-lot homes will continue that trend.

As for those moving in, Stannix said they are an eclectic bunch.

“We have retirees. We have young people. We have families. We have new Canadians — couples from India and Jamaica,” he says, adding that several of them are from Ontario and Quebec.

One of the conditions of sale is a two-year deadline for building a house that is at least 1,200 square feet.

Developers tried to snatch up all 16 properties, but Stannix told them the village, about 70 kilometres southwest of Fredericton, wasn't interested.

“We wanted people to come in an put their personal stamp on the house that they wanted to build,” he says. “And we wanted to make sure they understood what the lifestyle is like in McAdam.”

The mayor says prospective buyers were told to expect a laid-back atmosphere where snowmobiling, hunting, fishing and nature walks are the main ways to unwind.

"In McAdam, rush hour traffic is three people coming to an intersection and saying, 'No, you go first.'"

Meanwhile, officials from another town have already asked the mayor if he can help them duplicate the dollar-lot sales scheme.

As well, Stannix has his eye on potential properties along an undeveloped street in town that could soon be sold off for far less than they are actually worth.