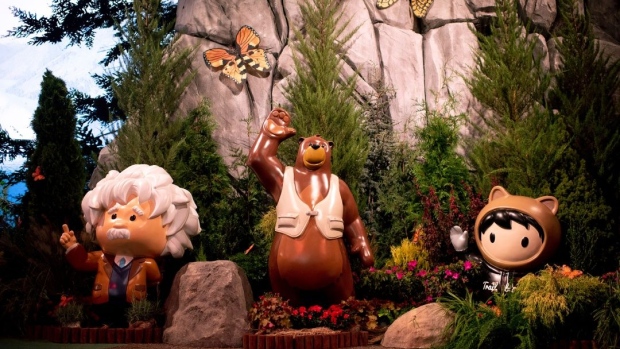 Decorations at the 2022 Dreamforce conference in San Francisco, California, US, on Sept. 20, 2022. , Photographer: Marlena Sloss/Bloomberg

While Climate Week was getting under way i n New York City, on the other side of the continent, thousands attended Dreamforce, Salesforce Inc.’s annual software and developer conference in San Francisco. Among the software giant’s many announcements, it revealed plans for a new  carbon offsets marketplace . This could be significant because today’s carbon markets are structurally limited in key ways.

First off, there is no global requirement to price carbon, which means that in many places carbon markets are entirely voluntary. And within voluntary markets there are a number of factors that limit their growth:

·      The quality of carbon offsets that current and future projects generate

·      The liquidity of voluntary carbon markets, and the ease with which companies can buy and sell credits

·      The familiarity of voluntary carbon markets to non-specialist business professionals

Without solving for all of these, voluntary carbon markets will remain restricted in scope. Increasing liquidity and especially familiarity will be critical to their expansion.

To see why, consider two hypothetical companies, each committed to reducing its emissions:

Company A is a global industrial firm active in multiple sectors. It’s published its commitment to certain emissions cuts on a set timeline, and has a high-level strategy group that will set the path for the next two decades. Company A has a plan for switching fuels, rotating capital stock toward lower-emission technologies, purchasing zero-carbon electricity and purchasing carbon offsets. It sees upsides in this strategy (and not just because the CEO promised it at the World Economic Forum).

It will have no trouble standing up whatever it needs to hit its goals. It might even increase profits in doing so.

Then there’s Company B, a regional wholesaler with a new CEO mandate to reduce the company’s carbon footprint in the next decade. Company B doesn’t have the capital to immediately switch out its boilers, climate control systems, or medium-duty vehicles. It’s not large enough to force supply chain changes through purchasing power. It can’t hire dedicated staff to create a strategic carbon plan or engage expensive consultants to do the same, or build its own sophisticated carbon offset trading operation.

Sincere about emissions reductions though it may be, Company B is structurally constrained.

But one thing that Company A and Company B may well have in common is that they are both Salesforce customers, since Salesforce has the world’s most used customer resource management (CRM) platform. A Salesforce marketplace for carbon offsets is nice for Company A, but it could be elemental for Company B. Rather than setting up new accounts in order to access ratings, or research individual offset projects one by one, it can see them all — and pay for them, via Stripe — in one place. A strategic imperative that previously might have required a dedicated team can now operate at the level of a purchasing manager.

Of course, a business-to-business marketplace like Salesforce’s doesn’t answer the troubling quality problem with offsets. It does not eliminate meaningless offsets from the market or  absolve companies of responsibility for their emissions. But liquidity and familiarity are like sunlight: an effective form of disinfectant. It will be harder for bogus offsets to persist in a much larger market, when more people include carbon offsets in their own business operations. Each new report on  flawed offsets will matter more, because it means something to more businesses.

There could be millions of smaller businesses that care about carbon today, or that will care about it in the future. They would like a carbon strategy but their own size, budget, and capabilities are inherently limiting. Today, these companies must make sincere efforts to bring themselves to the carbon market. Tomorrow, big business marketplaces might just bring the carbon market to them.