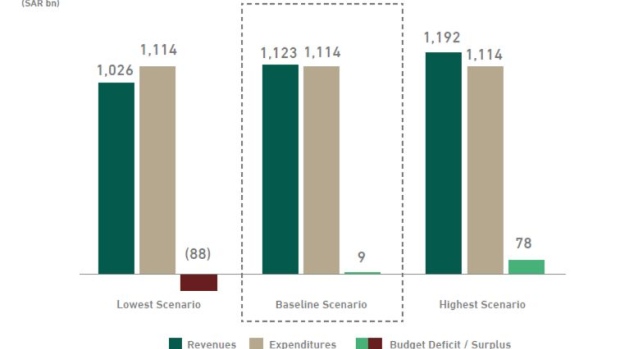 (Bloomberg) -- Saudi Arabia is budgeting for Brent oil at around $76 a barrel next year, according to Al Rajhi Capital, an outlook in line with current forward prices but far more bearish than expected by analysts.

The Finance Ministry said in a preliminary budget statement on Friday that it projects revenues next year at 1.12 trillion riyals ($298 billion), higher than a previous estimate published in December of 968 billion riyals. It envisages a budget surplus of 9 billion riyals, lower than estimated earlier.

“For 2023, we believe oil revenues could reach 754 billion riyals and non-oil revenue at 417 billion riyals,” said Mazen Al Sudairi, head of research at Al Rajhi Capital, a local investment bank. “Based on our assessment, the government’s 2023 budgeted revenues are likely based on an assumption of Brent at around $76 a barrel.”

The kingdom tends to take a relatively conservative view of crude prices in drawing up its budget and doesn’t divulge its assumptions. A median forecast of Bloomberg analysts shows Brent prices at $94.63 per barrel next year.

Under a baseline scenario, total revenue is projected to fall 8.1% in 2023 from this year. The Finance Ministry said it was “basing the estimates of oil and non-oil revenues in the budget on conservative standards in anticipation of any developments that may occur in the domestic and global economy.”

The government also set out scenarios for higher or lower government revenues, without explaining how it reached those assumptions.

Brent crude prices have already dropped from this year’s highs, trading at $87.9 a barrel on Friday. The OPEC+ coalition, of which Saudi Arabia is a key part, is facing growing calls to staunch the oil price slide by cutting production further.

Earlier this month, the alliance announced a symbolic output cutback to show its readiness to stabilize oil markets, and is already discussing lowering production further ahead of an Oct. 5 meeting to decide its next move, people familiar told Bloomberg.