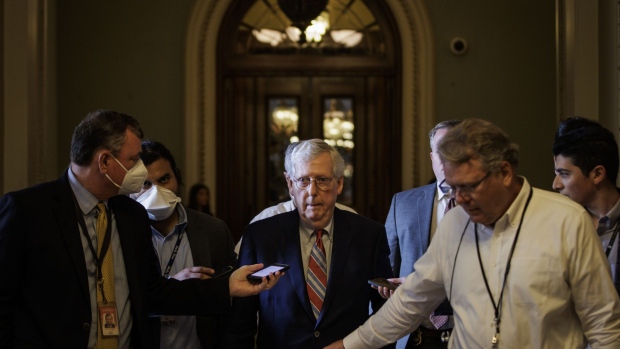 Senate Minority Leader Mitch McConnell, a Republican from Kentucky, walks back to his office from the floor of the US Senate in Washington, D.C., US, on Tuesday, June 21, 2022. The White House and congressional Democrats are in advanced talks on legislation that aims to fight inflation, rein in the deficit and revive parts of President Joe Biden's stalled economic agenda. , Bloomberg

(Bloomberg) -- A $52 billion package of incentives and subsidies to bolster US semiconductor manufacturing is far from dead, despite Senate Republican leader Mitch McConnell’s threat to scuttle the legislation containing it in order to stall passage of President Joe Biden’s economic plan.

Democrats have multiple paths to get the chips money, which has broad bipartisan support, through Congress.

McConnell stunned Democrats on Thursday by tweeting he would stand in the way of the wider China competition legislation of which the semiconductor provision is a part so long as Democrats plan to use the partisan budget process to ram through a separate package of tax increases on the wealthy and corporations, incentives for green energy, and prescription drug price limits.

While the ploy is aimed at stopping the budget package, it comes as Republicans have also been pushing Democrats to abandon plans to add big-ticket spending items to the China bill, which has been the subject of closed door talks for months.

Commerce Secretary Gina Raimondo, in an interview with the Washington Post, called McConnell’s threat a mere “bump in the road” designed to increase his leverage in negotiations.

“The only entity in the world that benefits from this bill not passing is China,” she said in the interview.

Enactment of the semiconductor incentives is a top priority for the Biden administration as well as manufacturers such as Intel Corp. and companies that are heavy users of chips. The global semiconductor shortage, sparked by supply chain bottlenecks during the pandemic, has eased somewhat, but there is still limited production for certain chips used in cars and home appliances.

McConnell made his threat as Senate Majority Leader Charles Schumer and Senator Joe Manchin of West Virginia, a key Democratic vote, were nearing a deal on the specifics of a $1 trillion budget and tax package. Republicans have largely rallied behind their Senate leader, including those who supported the competition and chips bill.

The McConnell move is not without political and procedural risks. Democrats, including House Speaker Nancy Pelosi’s spokesman Henry Connelly, attempted to frame the effort as being soft on China while standing in the way of prescription drug cuts. That message could blunt efforts of Republicans to present themselves in the midterms as both tough on Beijing and fighting to lower spiraling costs.

Democrats could ignore McConnell’s threats, pass their economic package with a simple majority in August and then hold a potentially painful vote on a completed China bill just before the elections to hammer the issue home.

At that point, with no chance to stall the economic plan, some Senate Republicans could peel off and vote for the bill. Eighteen Republicans, including McConnell, voted for the legislation when it passed the Senate in March.

In a second scenario, if Schumer and Manchin’s talks fall apart as Build Back Better talks did in December, then all sides simply let the China bill move forward.

Given this real possibility, Republican and Democratic staff are continuing to work on the details of the House and Senate China bills to try to make progress on a unified bill that could pass both chambers.

The biggest differences remaining on the competition bill revolve around trade policy, according to people familiar with the situation. Democrats are trying to add payments to workers displaced by trade deals under a program called Trade Adjustment Assistance.

There is also controversy over restrictions on investments by Americans and American companies in China, and a research and development tax provision. Democrats are widely seen walking away from an attempt to add immigration visa expansion and climate provisions to the bill after earlier dropping a marijuana banking provision.

In a third scenario, Democrats can under Senate rules add the $52 billion chips bill to the budget bill if Schumer and Manchin agree to do so. Other aspects of the China legislation can be tweaked from so-called authorizations to appropriations to make them comply with Senate budget rules.

Provisions related to Taiwan policy, outward-bound US investment, research security and federal procurement may not be allowed in the budget package, however.

Finally, Democrats have a Senate-passed version of the China bill sitting in the House. They could simply pass it and send it to Biden without adding more spending.

McConnell’s gambit of holding a bipartisan China competition package hostage while Democrats try and jam through a scaled-back economic plan isn’t the first time he’s used the lure of a bipartisan deal as leverage to try and slow or kill Biden’s larger agenda.

A year ago, McConnell insisted that Democrats separate the bipartisan infrastructure plan from the larger Democratic “Build Back Better” effort.

That increased tensions and confusion in the Democratic caucus. House liberals eventually caved on their insistence of simultaneously passing the infrastructure package alongside a massive Democratic plan, while negotiations with Manchin dragged on. Ultimately Democratic divisions, rather than any McConnell ploy, led to the collapse of the $2.2 trillion Build Back Better plan, but McConnell exacerbated Democratic infighting.