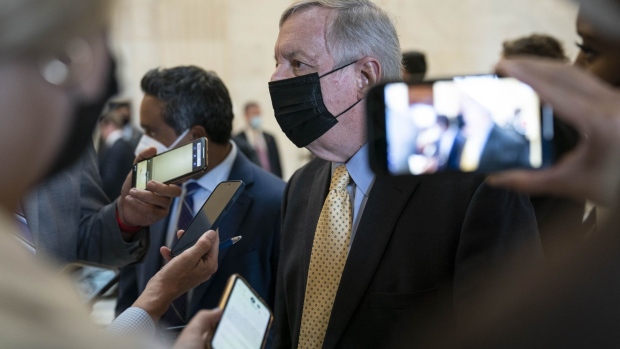 Senator Dick Durbin, a Democrat from Illinois, speaks to members of the media after a bipartisan luncheon in the Russell Senate Office Building on Capitol Hill in Washington, D.C., U.S., on Thursday, Sept. 23, 2021. Five months after the White House unveiled a vision of a new social contract between the federal government and American families, the administration is struggling to unite congressional Democrats behind a bill that can pass in face of united Republican opposition. , Bloomberg

Democrats have sent the Senate Parliamentarian Elizabeth MacDonough an alternative immigration plan after she recently blocked them from including a proposal to provide 8 million undocumented immigrants -- including young “Dreamers” and migrant workers -- a path to legal status and eventual citizenship.

The new approach centers on an existing immigration registry that is outdated but has been used as a tool to provide green cards for some undocumented immigrants on the basis of their long-term presence in the U.S., regardless of their status or how they entered the country. That registry hasn’t been altered in federal law since 1986, when an entry year of 1972 was the cut-off for this green-card tool to apply.

Democrats want to move the date to a more recent year, Durbin said, and are hopeful that using an existing law to aid immigrants, rather than creating a new one, can pass muster with MacDonough.

Durbin said he doesn’t have an estimate for how many immigrants might benefit, compared with the plan that targeted 8 million.

“I can’t tell you exactly whether the number is larger or smaller, but it would help a lot of people,” he said.

MacDonough’s earlier decision suggested it could be a tough task to win approval. She said Sept. 19 that the first proposal by Democrats is a policy change that “substantially outweighs” the budgetary impact of that change. That effectively made it out of bounds under the strict Senate rules that Democrats are using to clear the economic package without the threat of a GOP filibuster.

“It is by any standard a broad, new immigration policy,” MacDonough, the Senate’s adviser on the interpretation of rules and procedures, wrote. She also raised concerns that using reconciliation to change immigration law may mean someone’s legal status could be just as easily revoked if Democrats lost Senate control.

As she weighs the new proposal, the clock is ticking for Democrats who see the immigration plan as key to helping cement support for the broader tax and spending package they are racing to complete.

An immigration overhaul has broad support among Democrats in both chambers. Leaving it out will cause howls of protest from progressives, whose push for a much more sizable economic plan has already fallen by the wayside.