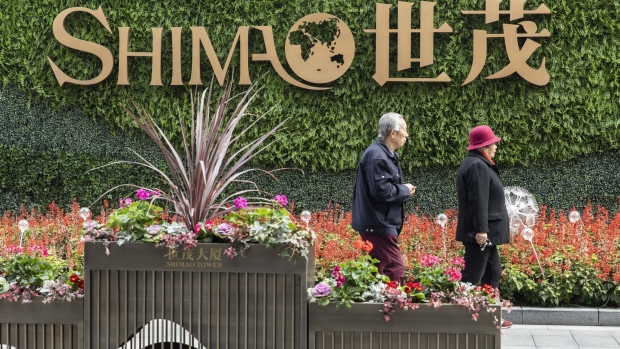 An elderly couple walk past a sign in front of Shimao Tower, developed by Shimao Group Holdings Ltd., in Shanghai, China, on Saturday, Jan. 8, 2022. Shimao, a bellwether for financial contagion in China's embattled property industry, suffered its biggest-ever bond rout on Thursday after a creditor said one of the developers units defaulted on a local loan. Photographer: Qilai Shen/Bloomberg , Bloomberg

The company is among Chinese real-estate companies that are selling assets to pay bills during a liquidity crunch following a government crackdown on excessive borrowing and speculation in the housing market. Regulators see asset sales as key to easing the crisis that’s impeding an economic recovery.

The assets are residential, office, commercial and hotel projects in 17 cities including Beijing, Shanghai and Hangzhou and in the Greater Bay Area in southern China, Caixin cited documents as saying.

Shimao is asking for 42.2 billion yuan ($6.7 billion) for 15 of the projects, the report said. The remaining 19 are either joint ventures or projects in an initial investment stage in which the developer has invested a combined 32.5 billion yuan, it said.

The developer is seeking more time from overseas investors to fully consider uncertainties and risks in order to make a debt risk disposal plan that will protect the interests of various parties, the company said in a statement.

CIFI Holdings has repaid its 5.5% notes that matured on Jan. 23 in full at their outstanding principle amount of around $240m, together with interest, it said in a stock exchange filing late Monday. The firm said it expected no material impact on its financial position after redemption.