With a full-blown retail raid targeting their short books, many of the stocks hedge funds are bullish on are suddenly in trouble, too.

Square Inc., Roku Inc. and Peloton Interactive Inc., among the industry’s favorite stocks, each tumbled at least 3 per cent Tuesday while GameStop Corp. continued to lead a rally among companies with the highest short interest. It spiked more than 65 per cent in late trading after Elon Musk tweeted about it.

The Goldman Sachs Hedge Industry VIP ETF (ticker GVIP), tracking hedge funds’ most popular stocks, fell for a fourth straight day, the longest stretch since October. That coincided with a 15 per cent rally in a basket of the most-hated shares over the stretch. 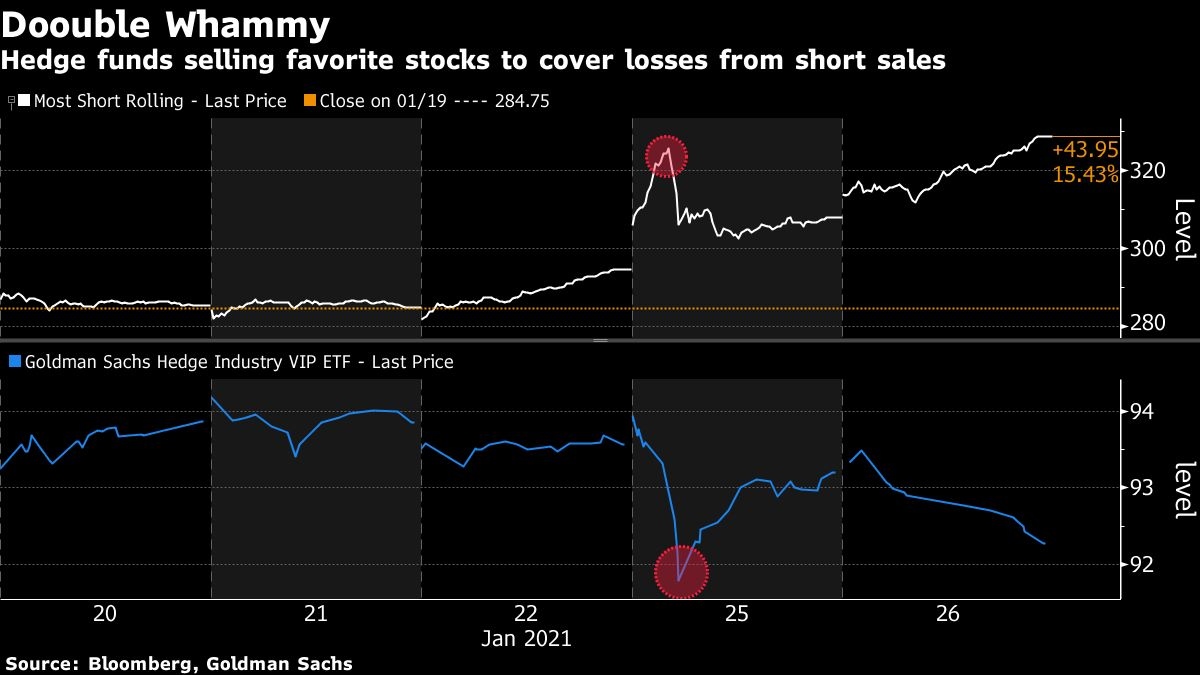 In a market where bearish wagers are backfiring like never before, one way to mitigate career risk might be to sell stocks that had previously been working -- even if that means parting with some beloved companies.

“The recent squeeze in heavily shorted stocks has been nothing short of extraordinary,” said Jonathan Krinsky, chief market technician at Bay Crest Partners. “If shorts cause too much pain, there is usually some repercussion on the other side as longs have to be sold to offset losses.”

But the long sides of their books are starting to feel the pinch too. On Monday morning, when stocks with the highest short interest soared as much as 11 per cent, the GVIP fund tumbled almost 2 per cent.

Such a squeeze not only hurts performance for hedge funds, it increases the potential size of a measure known as daily value at risk, both of which would prompt money managers to cut back their risk appetite, according to Kevin Muir of the MacroTourist blog.

“The real question is whether this selling starts a negative feedback loop,” Muir wrote Monday. “Even though it might seem like the stock market bulls should be cheering the squeezes, their success might end up being the trigger that brings about the general stock market correction many have been waiting for.”