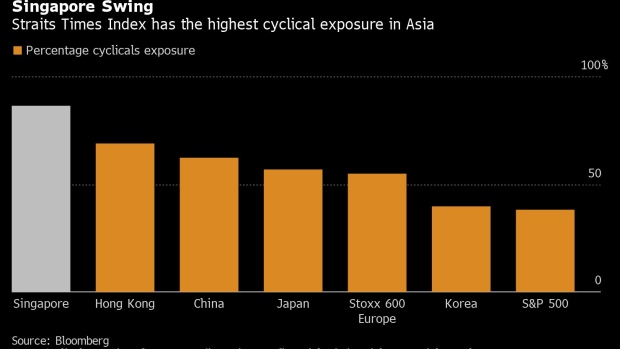 (Bloomberg) -- A rally in one of Asia’s best-performing stock markets is stalling amid rising virus cases at home and a rethink of the global reflation trade.

Second only to Taiwan among Asia’s major benchmarks this year, Singapore’s Straits Times Index has slipped about 1% so far in May, paring 2021’s gains to around 13%. The reintroduction of social distancing rules following a near doubling of new local infections has weighed on investor sentiment, despite the country having one of the highest vaccine coverage in Asia.

But this isn’t only a Singapore story. The Asian financial hub is a microcosm of the worldwide economic rebound, with exports standing at more than 150% of gross domestic product. And with an Asia-leading 86% weighting in so-called cyclicals, the STI has stuttered alongside a pause in the global rotation to such economically-sensitive shares.

Mapping the Coronavirus Outbreak Across the World

“We believe the STI is poised for a pullback” given the near-term reintroduction of Covid-19 measures and a seasonally weak month of May, said Kee Yan Yeo, a strategist at DBS Bank Ltd. “We see the STI turning sideways” in coming months, he added.

The benchmark has fallen on average 3% in May over the last 10 years, according to data compiled by Bloomberg.

After a flareup linked to the new coronavirus variant first identified in India, Singapore on Tuesday announced three-week-long restrictions such as limiting social gatherings to five people and a tightening of border curbs. The move risks another delay to the country’s proposed travel bubble with Hong Kong.

Analysts see the restrictions hurting real estate investment trusts, tourism and land transport stocks the most, a group which includes office and retail REITs such as Keppel REIT, SPH REIT and Starhill Global.

“Reduced circulation may also reduce public transport usage and raise concern for names such as ComfortDelgro,” Citigroup Inc.’s Arthur Pineda wrote in a note on Wednesday.

Meanwhile, with financials accounting for about half of the STI, and real estate and industrial stocks almost 40%, the benchmark’s relative regional performance has mirrored that of global value versus growth shares.

After beating its growth counterpart by over eight percentage points in the first quarter as investors rushed to gain exposure to a stimulus-fueled economic recovery, the MSCI AC World Value Index has trimmed its outperformance to less than one percentage point so far in the second quarter.

The value rally, part of the so-called reflation trade, has paused as Treasury yields retreat from year-to-date highs with traders debating how long-lasting the economic recovery and inflation will be.

“Any setback in the global economic rebound will have an impact on Singapore given our dependence on global trade,” said DBS’s Yeo.

That makes the future for Singapore’s shares linked to a resumption in the rotation to global cyclical shares, something that money managers including Invesco, Janus Henderson Investors, JPMorgan Asset Management Inc. and UBS Global Wealth Management are betting on.

“Even if the market experiences a few near-term hiccups from the pandemic-related noise, I still think that Singapore’s economic fundamentals remain sound and that the STI should end the year higher than where it is now,” said Invesco’s Chao.