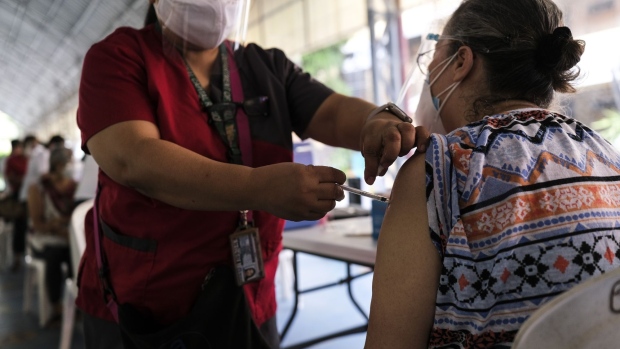 A health worker administers a second dose of the Sinovac Biotech Ltd. Covid-19 vaccine at a health clinic in Quezon City, Metro Manila, the Philippines, on Tuesday, May 11, 2021. The Philippines’ economy is struggling to gain momentum as elevated numbers of Covid cases hamper reopening efforts and destroy jobs. , Bloomberg

(Bloomberg) -- Sinovac Biotech Ltd.’s vaccine was found effective in protecting people from hospitalization and death, according to a study conducted on Indonesian health workers.

Maldives is tightening restrictions, including a ban on tourists from India, as it deals with one of the world’s fastest growing Covid-19 outbreaks.

Meanwhile, England reported no deaths from the disease in its latest daily update, and Germany’s health minister expressed optimism about falling infection rates. Greece has set a goal to vaccinate residents of all of its islands by the end of June to help boost the country’s image for tourists.

The Maldives, which has one of the world’s fastest growing Covid-19 outbreaks, has tightened its restrictions.

Residents of Male, the capital, are now required to stay indoors from 4 p.m., until 4 a.m. and visas for tourists from India and other nations in South Asia will be halted from May 13, the Indian Ocean archipelago’s Health Protection Agency said in Twitter postings.

The curfew, which had previously started at 9 p.m., will be imposed for a week. Other restrictions include a ban on group prayers at mosques, halting physical classes at universities and limiting restaurants to takeaways, the agency said.

Covid-19 vaccination of pregnant and postpartum women with AstraZeneca vaccine will be temporarily interrupted in Brazil, the country’s Immunization Program coordinator Franciele Francinato said during a press conference.

Pfizer and Sinovac’ vaccines will continue to be given out.

U.S. health agencies have identified 23 cases of a rare and dangerous blood-clotting condition among people who have received Johnson & Johnson’s Covid-19 vaccine, according to an update on the Centers of Disease Control and Prevention website.

As of May 4, more than 8.4 million doses of the J&J vaccine have been administered. Only 23 cases of so-called thrombosis with thrombocytopenia syndrome have been identified, underscoring that the known and potential benefits of the vaccine outweigh its potential risks, the CDC said.

“Nearly all reports of this serious condition have been in adult women younger than 50 years old,” according to the website, which was updated on Tuesday. “For all women, this is a rare adverse event. For women 50 years and older and men of all ages, this adverse event is even more rare.”

Sinovac Biotech Ltd.’s vaccine is wiping out Covid-19 among health workers in Indonesia, an encouraging sign for the dozens of developing countries reliant on the controversial Chinese shot, which performed far worse than western vaccines in clinical trials.

Indonesia tracked 25,374 health workers in capital city Jakarta for 28 days after they received their second dose and found that the vaccine protected 100% of them from death and 96% from hospitalization as soon as seven days after, said Health Minister Budi Gunadi Sadikin in an interview on Tuesday. The workers were tracked until late February.

“We see a very, very drastic drop,” in hospitalizations and deaths among medical workers, Sadikin said. It’s not known what strain of the coronavirus Sinovac’s shot worked against in Indonesia, but the country hasn’t flagged any major outbreaks driven by variants of concern.

The Netherlands will reopen gyms, zoos and amusement parks from May 19 if the number of Covid-19 infections and hospital admissions continues to decline.

The government will decide on Monday whether it needs to use a “stop button” to halt the easing of restrictions, Prime Minister Mark Rutte said Tuesday. From May 15, travel to countries with a low infection rate will be possible again, and a color-coded system will be used to provide travel advice.

The Dutch health service on Tuesday reported 47,108 Covid-19 cases over the past seven days, down from 52,987 the previous week. Hospital admissions declined to 1,379 in the past week, from 1,763 in the prior week.

The White House announced new efforts to vaccinate Americans, including an expansion of free rides from Uber Technologies Inc.and Lyft Inc. to get shots and a partnership with community colleges to administer vaccines.

Lyft and Uber will offer free rides through July 4 to anyone going to get vaccinated in the U.S., the White House said on Tuesday. It’s an expansion of programs they were already providing to some low-income users in cooperation with pharmacies and nonprofits.

“Our Plan A assumption is that Covid impacts start to recede in 2022,” Witty said in an appearance at the Bank of America Securities 2021 Virtual Health Care Conference.

U.S. health insurers mostly reported robust earnings for the first quarter yet were conservative with guidance for the rest of 2021, citing uncertainty amid the pandemic. Health insurers saw medical costs drop during Covid as people shunned regular doctors’ visits and elective surgeries in the early stage of the the pandemic.

Anvisa, as the regulator is known, said that the use of the shot on pregnant women should be “immediately suspended,” according to a statement on its website late Monday.

Scots will be able to drink alcohol indoors at pubs and restaurants from next week and meet more people in their homes after a reduction in new cases, First Minister Nicola Sturgeon said.

The general success of the vaccination rollout means some restrictions are being lifted ahead of schedule, she told reporters in Edinburgh. Cinemas, theaters and casinos will be able to reopen from Monday, and the government is also reviewing rules on physical distancing.

Rules may be relaxed further at the next review in three weeks, Sturgeon said.