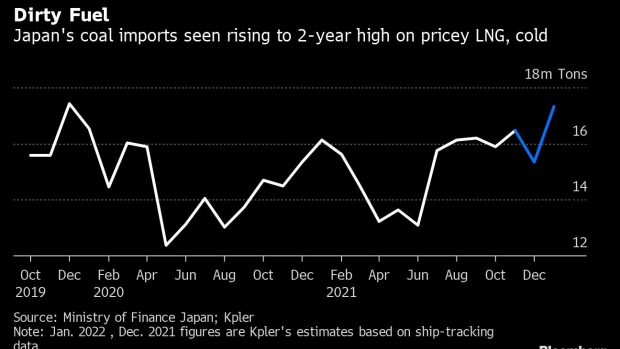 (Bloomberg) -- Japan’s coal imports are poised to jump to the highest level in at least two years as the nation’s utilities turn to the dirtiest fossil fuel as a replacement for expensive liquefied natural gas.

More than 17.3 million tons of coal will be delivered to the country this month, said Edwin Toh, a dry bulk manager at energy intelligence firm Kpler. That would be the highest since December 2019, and about 5% above the five-year seasonal average, according to Japanese customs data.

Snowy winter weather has boosted Japan’s power demand and curbed output from renewable sources, triggering a jump in coal-fired power generation. While spot prices are near a record high, coal is still cheaper than prompt shipments of cleaner-burning LNG.

From Tokyo to Boston, the world is being forced to depend more on coal amid a global natural gas supply crunch -- a worrying development just months after the COP26 climate summit in Glasgow. Efforts to curb emissions are challenging governments that also don’t want to disrupt economic growth.