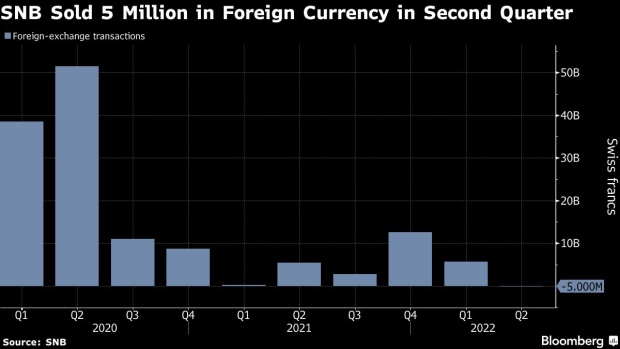 The Swiss National Bank isn’t in a rush to reduce its balance sheet, which is likely to stay high for a long time, the central bank’s president told Neue Zürcher Zeitung.

“We will not reduce our balance sheet simply because of its sheer size,” Thomas Jordan told the newspaper, stressing that the SNB will use its portfolio of foreign currencies -- currently worth 860 billion francs ($871 billion) -- only as an instrument of monetary policy.

Selling a significant amount of foreign exchange would let the franc strongly appreciate, which the central bank doesn’t intend, Jordan added. “The most conceivable time for sales is when we have inflationary pressures, interest rates are clearly positive, and the franc tends to weaken.”

The SNB raised rates just out of negative territory in September, to 0.5%, and the franc has appreciated some 10% against the euro since June. On Friday, the SNB announced it trimmed its foreign exchange portfolio in the second quarter, for the first time in at least two years.

The small foreign exchange sales were made to ensure “appropriate monetary conditions” given the development of the exchange rate, Jordan said.