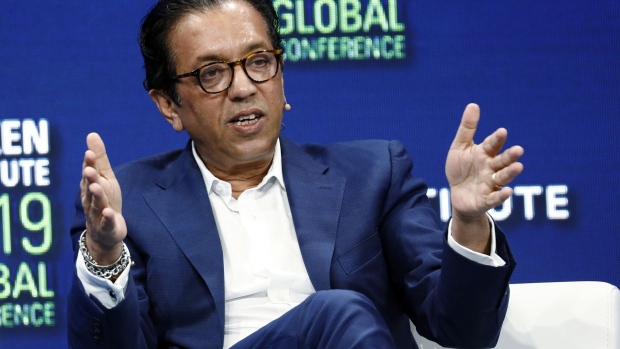 Rajeev Misra, chief executive officer of SoftBank Investment Advisers, speaks during the Milken Institute Global Conference in Beverly Hills, California, U.S., on Monday, April 29, 2019. The conference brings together leaders in business, government, technology, philanthropy, academia, and the media to discuss actionable and collaborative solutions to some of the most important questions of our time. , Photographer: Patrick T. Fallon/Bloomberg

(Bloomberg) -- SoftBank Group Corp. is making another surprising strategic move with plans to introduce its own blank-check company in the next two weeks.

Rajeev Misra, head of SoftBank’s Vision Fund, made the disclosure Monday in a virtual interview at the Milken Conference on a panel hosted by Bloomberg News. SoftBank is planning to invest its own cash in the special purpose acquisition company, or SPAC, at the same time public investors put in their cash. That would provide a shell for a promising private company to go public in the future, even if the markets turn rocky.

“We’re going to do a SPAC ourselves, with our own capital, as an investment vehicle,” Misra said. “It’s ideal for companies that were ready to go public 12 months from now and want to do it with certainty maybe six months earlier.”

Blank-check firms ask investors to put money in a stock before knowing which company they’re backing. The SPAC manager then chooses a company, typically one that’s privately traded, and pursues a merger that lets the startup go public and inherit the capital raised.

The first few years following the launch of the $100 billion Vision Fund in 2017 were marked by a hurricane of dealmaking by SoftBank, as the unit built up its portfolio of startups. But after losing billions from its investment in WeWork, the Japanese conglomerate has changed course. It’s raised 4.3 trillion yen ($41 billion) by selling stakes in holdings including T-Mobile US Inc., Alibaba Group Holding Ltd. and its domestic telecom unit. SoftBank has also signed a $40 billion-deal to sell Arm to Nvidia Corp.

SoftBank is now looking at ways to deploy the cash it’s raised, and has recently launched an asset management unit that’s putting money into public securities. However, Misra dismissed reports the company was a “whale” responsible for roiling public tech markets.

“Are we buying a few billion of other stocks to diversify away from the Alibaba we sold in the past six months?” Misra asked. “We’re still sitting on a lot of cash. It’s a liquidity-management strategy, it’s a diversification strategy.”

SoftBank’s SPAC will target later-stage growth companies, and be part of SoftBank Investment Advisors, the investment arm that houses the Vision Fund. While the exact size of the SPAC wasn’t clear, Misra hinted that SoftBank could invest $500 million.

The Vision Fund has backed scores of startups, including WeWork, Didi Chuxing Inc. and Grab Holdings Inc.. Misra didn’t comment on whether SoftBank would use SPACs to take its portfolio companies public, though many of them would likely consider an initial public offering in the next year or so.

“A SPAC is right for a good growth company which had plans to go public a year from now or nine months from now and uses this window of buoyant capital markets,” Misra said.

So far this year, more than 100 SPACs have raised over $40 billion on U.S. stock exchanges. One of the Vision Fund’s own companies, property technology firm Opendoor, said last month it was going public through a merger with a blank-check company led by Chamath Palihapitiya, a prolific SPAC manager.

Misra argued that SPACs are a result of surging public markets, where investors are striving for new opportunities. He cautioned they can be abused and that investors need to pay careful attention to management talent, sponsor fees and other details.

Misra gave a hypothetical example of a “good growth company” that wants to raise $1 billion at a valuation of $3 billion and later go public. “We say we want to invest in you,” he said. “The deal is we’ll put in $500 million, we’ll raise $500 million in a SPAC fundraising. It’s just an investment in the company.”