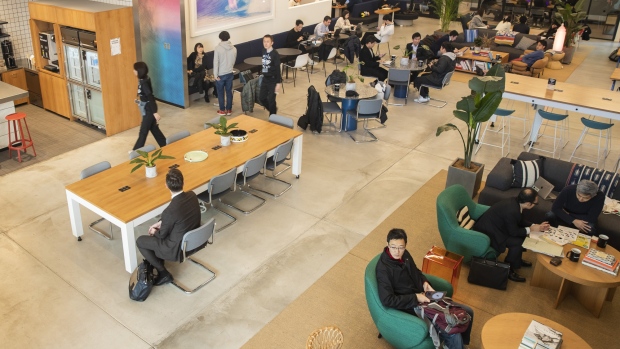 Members sit at the WeWork Cos. Iceberg co-working space in Tokyo. , Bloomberg

SoftBank Group Corp. is assembling a rescue financing plan for WeWork that may value the office-sharing company below US$8 billion, according to people familiar with the discussions.

The new figure is a fraction of the US$47 billion valuation the startup commanded as recently as January. The talks are fluid and the terms could change, said the people, who requested anonymity because the discussions are private.

WeWork, reeling since it scrapped its initial public offering, has been considering dueling plans from SoftBank and JPMorgan Chase & Co. to shore up its finances before it runs out of cash as early as next month. The company’s board could make a decision as soon as this weekend, according to some of the people familiar with the situation.

JPMorgan has been pitching investors on a US$5 billion junk-debt package for WeWork. The unsecured and secured notes portion of the bank’s plan are being offered on a “best-efforts” basis, according to people familiar with the matter, meaning banks haven’t committed to funding the deal irrespective of investor demand.

The bank has been sharing its proposal with about 100 investors as it tries to line up support for what would be one of the riskiest debt offerings in recent years, people with knowledge of the matter said earlier this week.