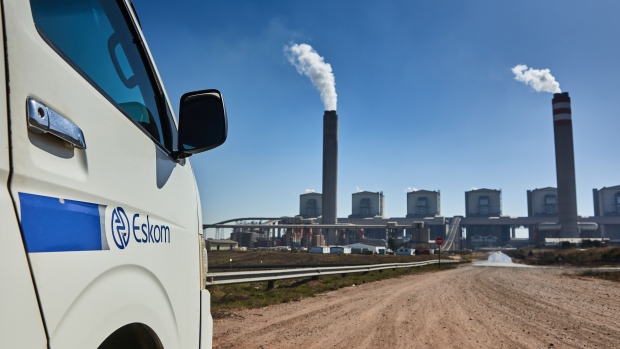 A corporate vehicle outside the Kusile coal-fired power station, operated by Eskom Holdings SOC Ltd., in Delmas, Mpumalanga province, South Africa, on Wednesday, June 8, 2022. The coal-fired plant’s sixth and last unit is expected to reach commercial operation in two years, with the fifth scheduled to be done by December 2023. Photographer: Waldo Swiegers/Bloomberg , Bloomberg

The National Treasury said in October’s budget update that the government may shift between one-third and two-thirds of the power company’s debt of about 400 billion rand ($23 billion) onto its own balance sheet. Details including the amount and terms of the transfer are expected to be announced in February’s budget.

Talks with creditors are ongoing and the government isn’t expecting haircuts, Godongwana said in an interview at Bloomberg’s Johannesburg office on Friday.

If bondholders were forced to accept losses, some credit-ratings companies such as S&P Global Ratings would consider it tantamount to a default by the utility. S&P assesses Eskom’s issuer rating at CCC+, seven notches below investment grade, with a stable outlook.

The quantum of Eskom’s debt that the government will take over has yet to be finalized, though it will be a “substantial amount” that’s partially influenced by the energy regulators’ decision on how much the utility can charge electricity consumers, Godongwana said. The National Energy Regulator of South Africa on Nov. 29 put off a decision on electricity tariffs for the next financial two years until the end of 2022.

While the delay affects the debt-relief plan for Eskom, officials have a “fair idea of where Nersa is likely to land” and have calculated a minimum tariff that would make the debt-transfer sustainable and give the power utility enough revenue to reduce its reliance on the government, the minister said.

South Africa is also in the final stages of hiring an independent contractor to conduct an operational assessment of Eskom and advise on conditions it should attach to the debt relief, Godongwana said. The plan is likely to occur in steps and the suggestions wouldn’t necessarily influence the first phase, he said.