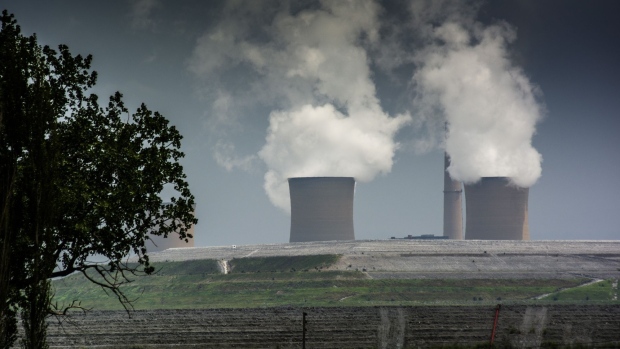 Emissions rise from the cooling towers of the Eskom Holdings SOC Ltd. Kriel coal-fired power station in Mpumalanga, South Africa, on Monday, Dec. 23, 2019. The level of sulfur dioxide emissions in the Kriel area in Mpumalanga province only lags the Norilsk Nickel metal complex in the Russian town of Norilsk, the environmental group Greenpeace said in a statement, citing 2018 data from NASA satellites. , Bloomberg

South Africa’s power utility, the nation’s biggest producer of greenhouse gases that mainly uses coal for electricity generation, is working on a plan aimed at net zero emissions by 2050.

Eskom Holdings SOC Ltd. “has an aspirational vision” of reaching the goal, which includes the creation of jobs, the utility said in a reply to questions. “We are currently developing a roadmap to define this pathway which includes the activities and enablers required along the way.”

The target marks a dramatic change for the almost century-old utility that uses the fossil fuel abundant in the nation for roughly 90% of power production. South Africa is also seeing more strategies to address climate change. Sasol Ltd., the fuel and chemicals maker and second-biggest producer of greenhouse gases in the nation, made a presentation on its plans this week.

Eskom’s goal comes at a time when the utility is attempting to split the business into separate units in order to make it profitable, and faces about 484 billion rand ($31 billion) of debt. Eskom Chief Executive Officer Andre de Ruyter said last month that about 200 billion rand of green financing is potentially available, though it involves complex underlying conditions. A government task force last week said that the path to a net-zero-emissions objective should be implemented in phases.

The utility’s activities in the shorter term “include the repurposing and re-powering of existing coal plants with lower carbon alternatives, enabling large scale renewables roll-out and assessing various storage options,” Eskom said. The pace of technology developments in the coming decades is unpredictable, it noted. “The ‘net’ in the net-zero target means that we will still have residual emissions over the coming years as we work towards decarbonizing the grid.”

De Ruyter has noted the potential for South Africa to create a clean energy industry as coal stations are retired.

Sasol, which is the world’s biggest producer of fuel from coal, is targeting a 10% reduction in emissions by 2030. The company’s CEO Fleetwood Grobler also said that more information is needed about options including hydrogen before details are decided over a longer-term plan. Next year it expects to have an emissions strategy through 2050.