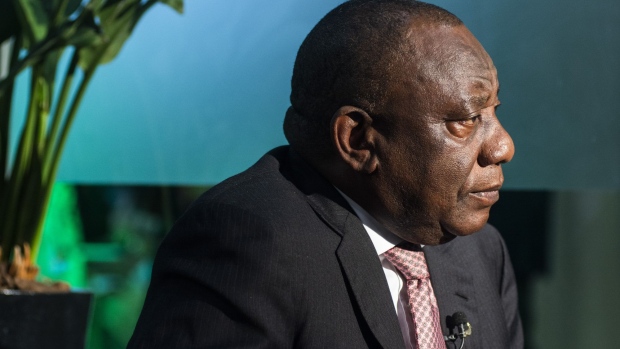 Cyril Ramaphosa, South Africa's president, pauses during a Bloomberg Television interview during the South African Investment Conference in Johannesburg on Wednesday, Nov. 6, 2019. Ramaphosa said his administration is on track to lure $100 billion in new investment within five years, with more than $16 billion already committed and many more projects in the pipeline. , Bloomberg

South Africa’s government is considering reopening the nation’s borders within coming weeks as the coronavirus crisis recedes, according to three people familiar with the matter.

The proposal was discussed at a meeting of the National Coronavirus Command Council on Tuesday and a final decision will be made at a special cabinet meeting on Wednesday, said the people, who asked not to be identified because no decision has been made yet. President Cyril Ramaphosa will address the nation at 7 p.m. to discuss his administration’s response to the pandemic.

The plan envisages borders being reopened in a two-phased approach, with travel initially being allowed within the continent before routes to destinations further afield are opened up, subject to conditions, the people said.

The government imposed a lockdown in March to stop the spread of the coronavirus, halting almost all cross-border travel and shuttering hotels and lodges. The controls on movement brought Africa’s most industrialized economy to a near standstill, with gross domestic product shrinking an annualized 51% in the three months through June from the previous quarter.

Ramaphosa began lifting restrictions in May, moving to so-called alert level 2 from level 5 in March. That’s enabled millions of people to return to work, though border closures, a night-time curfew and limits on alcohol sales continue to impose restraints on parts of the economy.

South Africa has diagnosed 651,521 coronavirus cases so far, the most in Africa. Almost 90% of those who contracted the disease have recovered and new infections have slowed from a peak of more than 14,000 a day in July to 772 cases reported on Tuesday. The country has also seen declining hospital and intensive-care unit admissions, and fatalities.

Tourism accounts for about 2.8% of economic output in South Africa, according to the World Travel & Tourism Council. The shutdown of the industry led to a ballooning in the deficit on the nation’s services account to 56.7 billion rand ($3.5 billion) in the second quarter -- the largest shortfall since at least 1960 -- from 7.1 million rand in the previous quarter.