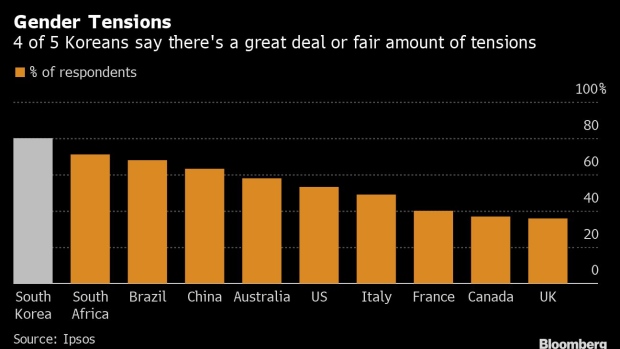 (Bloomberg) -- South Korea’s president argued that eliminating the ministry set up to protect women would actually help them, drawing a rebuke from woman’s groups who said the plan would set back efforts to close one of the world’s worst gender gaps.

“Abolishing the Ministry of Gender Equality and Family would be about bolstering the protection of women, children, families and the socially weak,” Yoon Suk Yeol told reporters Friday. He implied the ministry’s structure doesn’t do enough to protect victims of sexual abuse by those in power.

Yoon’s conservative government this week moved forward with its plans to dissolve the ministry and fold many of its functions into the health ministry. He had courted young male voters opposed to gender-equality measures in the presidential election earlier this year by saying that his opponents were stacking the deck against them.

More than 100 women’s rights groups issued a joint statement Friday, pledging to campaign against the government for opposing gender equality and democracy. Yoon’s plan would reduce protections for women and vulnerable groups and is a “regression to the past when women were used as a tool for population policy,” they said.

The main opposition Democratic Party holds a solid majority in parliament and was expected to block Yoon’s proposal, the Yonhap News Agency reported.

Politics in Asia’s fourth-largest economy have been riven by intense debates over gender equality for much of the five-year term of President Moon Jae-in, a Democratic Party leader and self-described “feminist president,” who was in office before Yoon. Besides suffering rampant sexual harassment and online bullying, South Korean women also bring home about two-thirds the wages of their male counterparts, the biggest gender pay gap among major developed economies.