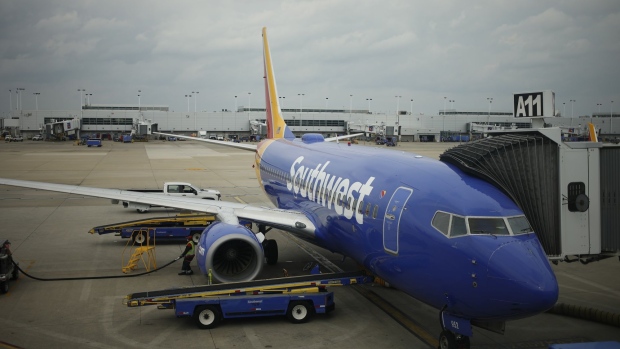 (Bloomberg) -- Boeing Co. gained an unlikely ally in the pilots of the world’s largest 737 operator as the planemaker lobbies Congress to extend the deadline for certifying its Max 10 and Max 7 models and avoid a potentially costly cockpit redesign.

“We 100% support the extension,” Casey Murray, head of the Southwest Airlines Pilots Association, said in an interview Friday. The union backing bolsters Boeing’s arguments on a politically sensitive issue -- even as the two parties battle in court over a 2019 lawsuit filed by the aviators.

Congress in 2020 required that newly built airliners have more modern safety alerting systems after assurances the last remaining 737 models would be cleared to fly by this year. But both the Max 7 and Max 10 models of the jet are in danger of missing the late December deadline, the US Federal Aviation Administration has said in letters to Boeing and a senator in recent days.

“Flying two airplanes that are essentially the same but with different alerting systems can cause confusion at a critical time,” Murray said, particularly for pilots flying “six legs in a day and being swapped out between airplanes.” He supports pushing the upcoming deadline out “a couple of years” to allow Boeing and US regulators to finish approvals for the final 737 Max models.

Boeing faces a tricky political battle to convince US lawmakers to intervene on its behalf after two fatal 737 Max crashes “reshaped the political landscape,” Loren Thompson, a pundit with the Lexington Institute, said in an interview. A union representing American Airlines pilots opposes the measure, along with crash victims families and Representative Peter DeFazio, an Oregon Democrat and frequent Boeing critic.