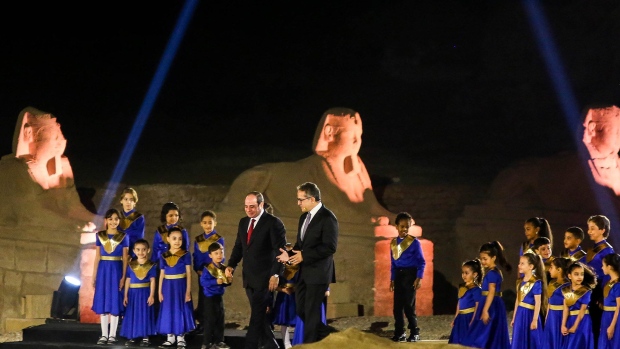 (Bloomberg) -- Egypt unveiled a restored 2,500-year-old processional way that’s flanked by ram-headed statues and sphinxes at a glittering ceremony Thursday, its latest step in reviving a tourism industry recovering from the pandemic.

Hundreds of performers clad in ancient Egyptian garb took part in the tightly choreographed evening performance, parading and dancing on the 2,700-meter (2,950-yard) sandstone Avenue of Sphinxes, which links the famed temples of Luxor and Karnak in the ancient city of Thebes on the Nile River’s eastern bank.

Fireworks lit up the night sky accompanied by a soaring orchestral score as the event in the Upper Egyptian city of Luxor attended by President Abdel-Fattah El-Sisi and key government minsters came to an end.

Construction of the original avenue was finished during the reign of Nectanebo I (380-362 BC), one of Egypt’s last native pharaohs whose armies sparred with Persian invaders. It was then renovated by the Ptolemaic Queen Cleopatra, and later used by the Romans.

The restoration’s one of several projects undertaken by Egyptian authorities in a bid to win back the legions of tourists who used to flock to the country’s ancient treasures before post-Arab Spring turmoil and then the coronavirus took their toll. In April, Egypt staged a grandiose parade to move 22 royal mummies to a new Cairo museum that celebrates the country’s ancient heritage.

Foreign visitors provide one of the North African nation’s main sources of foreign currency. But as the global health emergency froze travel, income dropped by half in the fiscal year that ended in June, falling to $4.9 billion from $9.9 billion in the previous 12 months, according to the central bank.

Latest government figures suggest a recovery is underway, with the hospitality sector expanding 182% during the July-September period.

Luxor, known as ‘The City of a Hundred Gates’ among other names during ancient times, is considered an open-air museum because of its extensive cultural riches.

Thursday’s performance partly recreated a ceremony from ancient times, when the avenue was used during the annual Opet festival and Egyptians paraded statues of Amun and Mut in a symbolic re-enactment of their marriage. Once at the Luxor temple, Amun was transformed into Min, the god of fertility.