Canada has recovered all of the roughly three million jobs lost to COVID-19.

The country’s economy added 157,100 jobs in September, returning the labor market to pre-pandemic levels, Statistics Canada said Friday in Ottawa. That compares with economists’ expectation of 60,000 new jobs, according to the median estimate in a Bloomberg survey.

The unemployment rate fell to 6.9 per cent from 7.1 per cent in August. Hours worked were up 1.1 per cent in the month but remain 1.5 per cent below their pre-pandemic level. 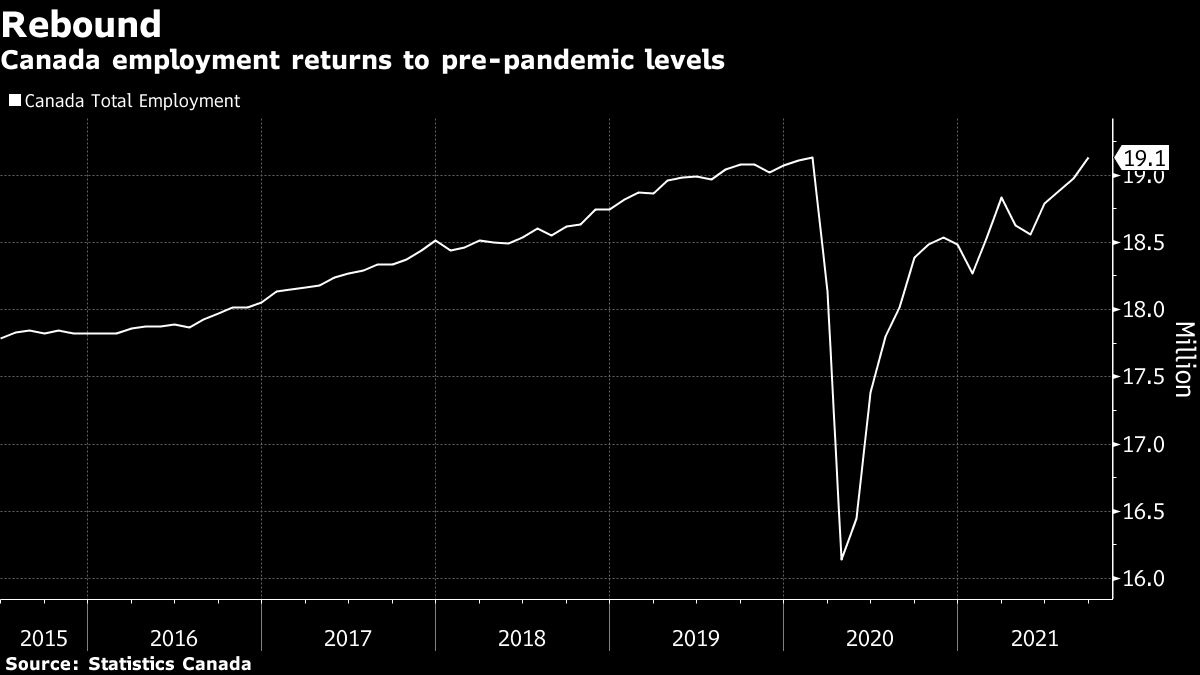 Bonds sold off, with the two-year benchmark yield at 0.651 per cent, the highest level since March 2020.

The robust numbers are a welcome sign for the nation’s economy. They suggest that companies are willing and able to hire workers as virus restrictions ease and as high vaccination rates boost optimism among consumers and businesses.

They will also bolster predictions by Bank of Canada officials that the economy will post a strong rebound after contracting earlier this year during a third wave of COVID and business restrictions.

The strong report also reinforces the expectation that the central bank will taper its weekly purchases of Canadian government bonds to $1 billion (US$799 million) later this month from the current pace of $2 billion, effectively halting the expansion of its balance sheet.

Also on Friday, the U.S. posted weaker-than-expected jobs numbers, with employment rising by 194,000 or less than half of what economists had forecast. That complicates a potential decision by the Federal Reserve to begin scaling back monetary support before the end of the year.

Canada’s job gains were driven entirely by full-time workers while part-time employment fell slightly. The increases were led by the public administration, information culture and recreation sectors. Around 139,000 people entered the labor force in September, bringing the participation rate to 65.5 per cent, also the highest since before the pandemic.

“I think it reinforces the view that the second half of this year, fueled by the economic reopening that continues to occur and the lifting of some restrictions, except Alberta, will be somewhat strong,” Dominique Lapointe, an economist at Laurentian Bank, wrote by email. That’s “enough in the BoC’s view to taper another $1B per week in October and enter the reinvestment phase of its QE program.”