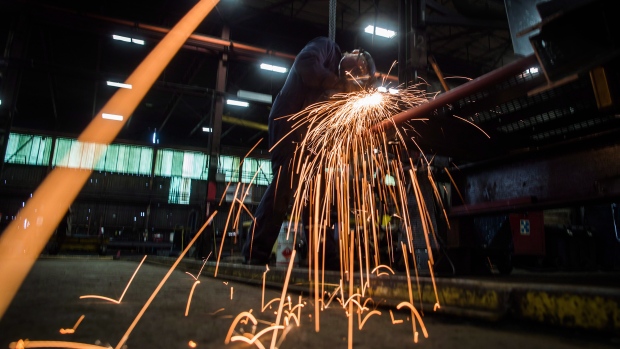 A worker uses a grinder on a steel stairs being manufactured for a high school in Redmond, Wash., at George Third & Son Steel Fabricators and Erectors, in Burnaby, B.C., on Thursday, Mar. 29, 2018. , THE CANADIAN PRESS/Darryl Dyck

OTTAWA - Canadian wholesale sales edged up 0.3 per cent in August to advance for a fourth consecutive month, though at a much slower pace than in previous months.

Statistics Canada said Monday that wholesale sales were up 0.3 per cent to $65.7 billion in August, boosted by the building material and supplies subsector as well as the auto sector.

The result for August matched the average expectations of economists, according to financial data firm Refinitiv.

“We continue to expect that, with the economy continuing to reopen in August, other industries, including retailing, will have posted enough gains for monthly GDP to have risen by roughly one per cent,” Mendes wrote in a report.

Four of seven subsectors increased in August as sales in the building material and supplies subsector rose 7.0 per cent to hit a record high of $9.8 billion.

The gains were offset by a 3.1 per cent drop to $9.6 billion in the personal and household goods subsector, mainly due to lower sales in the pharmaceutical and pharmacy supplies industry.

In volume terms, wholesale sales increased 0.1 per cent in August.

In addition to the motor vehicles and motor vehicle parts and accessories group, Statistics Canada said the food, beverage and tobacco and personal and household goods subsectors were still below their pre-pandemic levels.