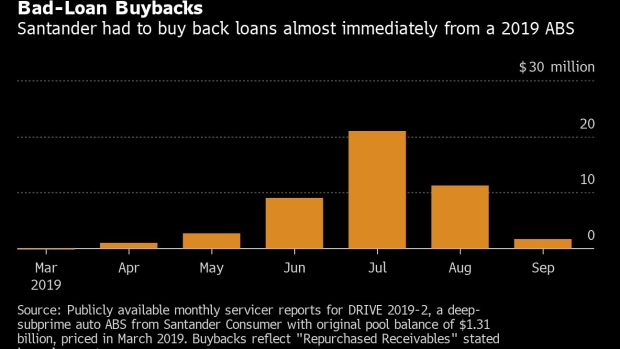 (Bloomberg) -- A growing percentage of Santander Consumer USA Holdings Inc.’s subprime auto loans are turning out to be clunkers soon after the cars are driven off the lot.

Some loans made last year are souring at the fastest rate since 2008, with more consumers than usual defaulting within the first few months of borrowing, according to analysts at Moody’s Investors Service. Many of those loans were packaged into bonds.

Santander Consumer is one of the largest subprime auto lenders in the market. The rapid failure of some of its loans implies that a growing number of borrowers may be getting loans based on fraudulent application information, a problem the company has had before, and that weaker consumers are increasingly struggling. During last decade’s housing crunch, mortgage loans started souring within months of being made, signaling growing problems in the market.

Subprime car loans aren’t in a crisis, but lenders across the industry are facing more difficulty. Delinquencies for auto loans in general, including both prime and subprime, have reached their highest levels this year since 2011.

Santander Consumer had sold to bond investors many of the loans that are going bad. When the debt sours soon after the securities are sold, the company is often obliged to buy the loans back, shifting potential losses on the loans to the original lender and away from bond investors.

“This could eventually be a problem for the company and impact its actual performance,” said Kevin Barker, an equity analyst at Piper Jaffray & Co. Souring loans can cut into profitability, he said, adding that the company can raise its lending standards to reduce losses on new financing it provides.

A Santander Consumer USA spokeswoman said the firm’s asset-backed securities performance has been consistent over time, and are structured with credit enhancement levels that are appropriate for the risk profile of the securitizations. The firm “does repurchase loans from its securitizations for various reasons, which have been consistent over time and in line with the requirements of our transactions,” she said.

On earnings calls this year, executives at Santander Consumer have said that the company is less likely to cut deals with borrowers that fall behind on their obligations now. That results in the lender writing off more bad loans, but also cuts the balance of troubled credits it is looking to restructure.

Santander Consumer had $26.3 billion of subprime auto loans as of June 30 that it either owned, or bundled into bonds, according to a report from S&P Global Ratings. That represents nearly half of the company’s total managed loans. The percentage of borrowers behind on their loans climbed to 14.50% from 13.80% a year earlier for the loans the company collects payments on, S&P said.

The uptick in delinquencies and defaults may be tied to Santander Consumer’s efforts to win more business from Fiat Chrysler Automobiles NV after tightening its longtime financing partnership with the carmaker in July. The updated agreement, which included a one-time payment of $60 million from Santander Consumer to Fiat Chrysler, came after the carmaker’s chief financial officer had said last year that his company was looking at forming its own financing business in the U.S.

But the rising losses may also be a sign that the weakest borrowers are having growing financial trouble as economic growth shows signs of slowing. The percentage of borrowers that are at least 90 days late on their car loans is broadly growing, according to data from the Federal Reserve Bank of New York. At the end of 2018, the number of delinquent loans exceeded 7 million, the highest total in the two decades the New York Fed has kept track.

In fact, banks and finance companies are making increasingly longer-term loans for cars, a sign they’re taking more risk by waiting longer to get fully repaid. The terms of loans reached record highs in the second quarter, averaging 72.9 months for subprime new vehicle loans, according to Experian.

Some loan terms have increased to 84 months, in both prime and subprime auto ABS deals. That can weaken auto-bond performance when credit conditions sour, according to a recent report from S&P.

There are signs that Santander Consumer in particular has eased some underwriting practices. For a roughly $1 billion subprime auto bond that priced earlier this year, Santander Consumer verified fewer than 3% of borrower incomes, even though income verification is a critical way to combat fraud. In comparison, a competitor, GM Financial, verified 68% in one of their bonds.

Some of its struggling loans were bundled into its main series of bonds backed by subprime auto loans. The lender has had to buy back more than 3% of the loans it packaged into some of those bonds, according to a Bloomberg analysis of publicly available servicer reports. Most of those repurchases were because they defaulted early, according to Moody’s Investors Service. That’s more than Santander Consumer bought back before and higher than industry standards, according to Moody’s analysts.

While Santander Consumer has generally chosen to repurchase loans that defaulted early to improve the performance of its securitized deals, it was required to do so in deal documents following a settlement with Massachusetts and Delaware in 2017. The states alleged that it facilitated the making of high-cost loans that it knew -- or should have known -- were not affordable for the borrowers.

Santander Consumer is the only subprime auto asset-backed issuer that has contractually made this promise. The loan buybacks have recently ticked up as more borrowers fail to meet their first two payments.

For another series of bonds, those backed by loans to some of the riskiest subprime borrowers, Santander Consumer had to buy back even more loans. For one bond that was sold about a year ago, around 6.7% of the loans have been repurchased so far, mostly in the first few months after issuance, according to a Bloomberg analysis. That’s higher than average for a deep-subprime auto lending business, according to PointPredictive, which consults on fraud to banks, lenders, and finance companies.

During last decade’s housing bubble, early defaults began creeping higher around 2007. Now, as then, the rapid defaults may reflect borrowers who should have never received loans in the first place, said Frank McKenna, chief fraud strategist at PointPredictive.

“We’ve always drawn a link between EPDs and fraud,” McKenna said, referring to early payment defaults. “We found that depending on the company, between 30% to 70% of auto loans that default in the first six months have some misrepresentation in the original loan file or application.”

Even so, Santander Consumer’s repurchases of loans packaged into bonds highlights how investors in the securities are often insulated from some losses on the underlying car debt. The portfolio of debt backing Santander Consumer’s asset-backed securities from 2018 actually performed better than deals from the previous two years because the company stepped up its repurchases of early-payment-default loans.

“The situation is somewhat perverse in that bondholders are actually benefiting from high early-payment defaults through the repurchases,” said Moody’s analyst Matt Scully.

The bonds have other protections built into them to withstand stress. For example, the securities may be backed by extra car loans beyond the face value of the notes issued, which can help absorb losses from bad loans. Santander Consumer is the biggest securitizer of subprime auto loans, having sold close to $70 billion of bonds backed by subprime car loans since 2007, according to data compiled by Bloomberg.

But any losses don’t just disappear: in the end, if there are enough, Santander Consumer and bondholders can suffer.

“The weakening performance in the managed portfolio signals elevated risks and is overall a negative development,” said Moody’s analyst Ruomeng Cui in a telephone interview.

To contact the reporter on this story: Adam Tempkin in New York at atempkin2@bloomberg.net

To contact the editors responsible for this story: Nikolaj Gammeltoft at ngammeltoft@bloomberg.net, Dan Wilchins, Boris Korby