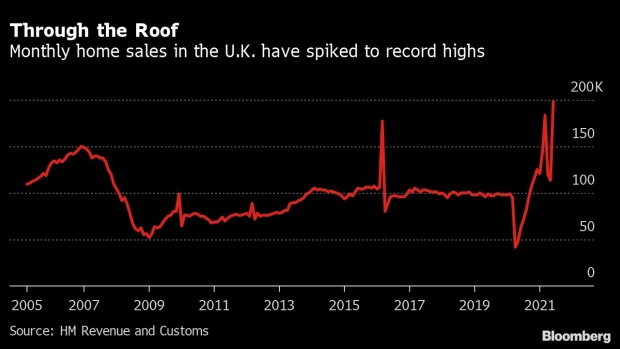 LONDON, ENGLAND - MARCH 03: Chancellor Of The Exchequer, Rishi Sunak stands outside 11 Downing Street ahead of the Chancellor of the Exchequer's delivery of the budget on March 3, 2021 in London, England. The Chancellor, Rishi Sunak, presents his second budget to the House of Commons. He has pledged to protect jobs and livelihoods as the UK economy has faced crisis during the Coronavirus Pandemic. (Photo by Chris J Ratcliffe/Getty Images) , Photographer: Chris J Ratcliffe/Getty Images Europe

(Bloomberg) -- A tax break on property purchases played a smaller part than commonly thought in the U.K.’s pandemic housing boom, according to a report that accuses Chancellor of the Exchequer Rishi Sunak of wasting billions of pounds of public money.

The analysis by the Resolution Foundation claims that the buildup of savings during lockdowns, changes in housing preferences and cheaper borrowing costs had an equal and possibly greater role in the recession-defying 13% surge in property values over the past year.

Researchers said the stamp-duty holiday introduced by Sunak in July 2020 has proved both “expensive and unnecessary,” with the cost in foregone taxes in England and Northern Ireland alone set to total 4.4 billion pounds ($6 billion) by the spring of next year.

“The problem with the stamp duty holiday isn’t that it caused a house price rise, but that a boom in transactions and prices would almost certainly have taken place without it,” said Krishan Shah at the Resolution Foundation. “That begs big questions about value for money.”

The study published Saturday found that house prices grew faster in local authorities where people saved least from the transaction-tax cut, and slower in districts with the highest tax savings. A similar pattern is observable when it comes to the number of properties changing hands, it said.

The stamp-duty holiday was introduced in a bid to to kickstart the housing market and the wider economy in the wake of the first coronavirus lockdown. The maximum saving to a buyer was 15,000 pounds. That fell to 2,500 pounds on July 1 and the break is due to end altogether on Sept. 30.

“Similar -- and in many cases greater -- house price growth also took place across the same period in Germany, the United States, Canada and Australia and France,” the Resolution Foundation said. “These trends demonstrate that it is shared factors,” including pandemic-driven demand for larger homes away from city centers, “that are the principal drivers of surging prices.”