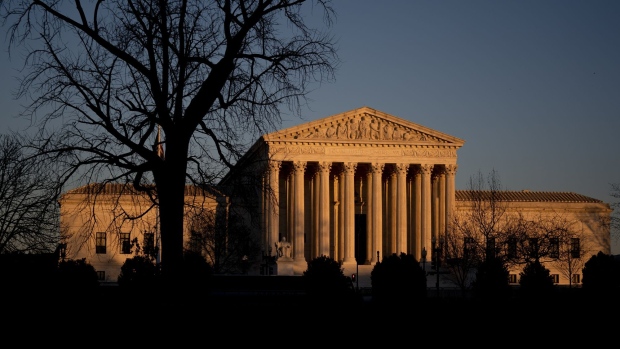 The U.S. Supreme Court in Washington, D.C., U.S., on Friday, Jan. 22, 2021. President Biden warned the nation to prepare for its darkest days in the yearlong pandemic, predicting that as many as 100,000 more Americans will die over the next month as he overhauls the federal coronavirus response and presses Congress for more aid. Photographer: Stefani Reynolds/Bloomberg , Bloomberg

(Bloomberg) -- The US Supreme Court kept President Joe Biden’s student-loan relief plan on hold while agreeing to hear arguments likely to produce a definitive ruling by June in a high-stakes showdown over presidential power.

The justices declined for now to lift a federal appeals court decision that is blocking the program. But they granted the administration’s request for fast-track review of a challenge to the plan by six Republican-led states. The court indicated it will hear arguments in late February or early March.

Biden’s plan could cost an estimated $400 billion. The program would forgive as much as $20,000 in federal loans for certain borrowers making less than $125,000 per year or $250,000 for households. About 26 million people had requested forgiveness before the Education Department stopped accepting applications, and the administration says more than 40 million Americans would be eligible.

Student loan payment obligations will remain paused until the case is resolved, the White House said Thursday. “We welcome the Supreme Court’s decision to hear the case on our student debt relief plan for middle and working class borrowers this February,” White House Press Secretary Karine Jean-Pierre said in a statement.

The Nebraska-led states say Congress didn’t authorize the president to unilaterally take a step with such sweeping economic and political ramifications. They say Biden is misusing a law, known as the HEROES Act, that lets the Education Department provide debt relief during national emergencies.

That law “requires a real connection to a national emergency,” the states argued in court papers. “But the department’s reliance on the Covid-19 pandemic is a pretext to mask the president’s true goal of fulfilling his campaign promise to erase student-loan debt.”

The administration says debt relief would ameliorate harms stemming from the pandemic, which former President Donald Trump declared a national emergency in 2020. Both administrations invoked the HEROES Act to suspend payments and interest accrual on student loans.

Missouri, Arkansas, Iowa, Kansas, and South Carolina are pressing the challenge alongside Nebraska.

The biggest legal issue for opponents of the plan has been establishing standing to sue -- that is, showing they are being directly harmed by the policy. The 8th US Circuit Court of Appeals said the states had standing because of the impact on a loan servicer, the Missouri Higher Education Loan Authority, that has financial ties to that state’s treasury.

The servicer, known as MOHELA, is a nonprofit, state-created entity that by law must contribute to a fund Missouri uses to pay for projects at public colleges.

The states said MOHELA “is at risk of losing at least half of the direct loan accounts it services, which equates to millions of dollars of revenue per year.”

Prelogar says that Missouri set up MOHELA as a legal entity separate from the state and that the servicer wasn’t involved in the decision to sue the administration.