U.S. stocks declined for a second day with losses steepening in the final 15 minutes of trading as investors weighed the rush to reopen the economy against inflationary pressure from a rise in commodity prices.

All three of the main U.S. equity benchmarks closed lower after megacap technology stocks including Amazon.com Inc., Microsoft Corp. and Alphabet Inc. erased earlier gains. Nine of the main 11 S&P 500 industry groups declined, with energy stocks leading losses as oil prices dropped amid a report that significant progress has been made to revive the U.S.-Iran nuclear deal. AT&T Inc. plunged the most in the benchmark gauge after the company said it plans to spin off its media operations. Walmart Inc. rallied the most in six weeks after boosting its profit outlook.

Stocks have been volatile after touching a record in early May as investors assessed economic growth prospects against a COVID-19 resurgence in countries including India. Minutes from the latest Federal Reserve meeting, due Wednesday, may offer clues on inflation pressure and hints of a timeline for tapering stimulus. Fed Vice Chair Richard Clarida said Monday that the weak U.S. jobs report showed the economy had not yet reached the threshold to warrant scaling back asset purchases. Inflation concerns intensified last week when the government reported the fastest increase in consumer prices since 2008 and commodities from iron ore to Brent crude rose to multiyear highs. 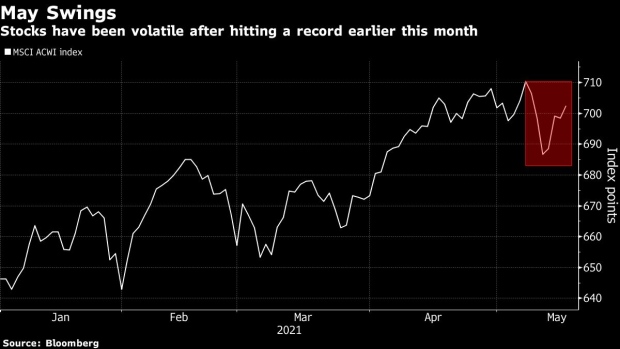 “The market has been trying to process a very unusual economic environment and a confluence of factors that it has not faced for a long time,” said David Donabedian, chief investment officer of CIBC Private Wealth Management. “It’s a new set of circumstances for markets, so we’ve had more churn over the last couple of weeks. I personally would say that the stock market has absorbed it all extremely well because there’s still a high conviction view on earnings being strong.”

“The fact that inflation and interest rates are on the way up, I think we have to recognize that returns overall in the U.S. equity market from this point will be very modest and perhaps volatile compared to what we have enjoyed especially over the last 12 to 15 months,” Abby Joseph Cohen, senior investment strategist at Goldman Sachs Group Inc., said in an interview on Bloomberg TV. “What appeals to me is that investors are acting like investors again. There is less emphasis on momentum and there’s more emphasis on relative valuation and which of the companies that have the strongest cash flow growth and are investing that cash flow growth.”

West Texas Intermediate crude extended declines after the BBC Persian news channel, citing Russian diplomat Mikhail Ulyanov, reported that a major announcement may be made on Wednesday regarding talks to broker an agreement between Iran and the U.S. and revive the 2015 nuclear deal. A return to the accord could allow for the removal of U.S. sanctions on Iran’s crude exports and bring more supply to the market.

Elsewhere, Bitcoin fell to the lowest since February after the People’s Bank of China reiterated that the digital tokens cannot be used as a form of payment. Coinbase Global Inc. fell after Monday’s drop below the reference price used in its April direct listing.