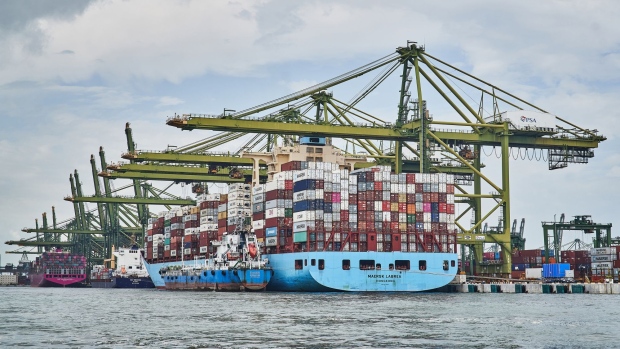 Container ships docked at the Pasir Panjang Terminal, operated by PSA International Pte, are seen from a boat off the coast of Singapore, on Tuesday, May 25, 2020. The Singapore government expects gross domestic product to shrink 4% to 7% this year, down from a previous forecast of a 1%-4% contraction, as the outlook for external demand deteriorates, the Ministry of Trade and Industry said in a statement Tuesday. Photographer: Lauryn Ishak/Bloomberg , Bloomberg

(Bloomberg) -- A unit of Temasek Holdings Pte. is in talks for a potential investment of at least $400 million in Singapore shipping tycoon Chang Yun Chung’s Pacific International Lines Pte., according to people familiar with the matter.

Heliconia Capital Management Pte., a wholly owned subsidiary of Singapore’s state investment firm, could take a combination of equity and debt in the struggling shipping line, the people said, asking not to be identified as the process is private. Heliconia is keen to take a stake in Pacific International in part to secure logistics for food supplies to Singapore amid the coronavirus pandemic, they said.

Pacific International said Tuesday it entered into a six-month exclusivity agreement with Heliconia in relation to a potential investment. The company is the latest to come under stress as trade tensions between the U.S. and China affect global trade. The industry has also been hit by the coronavirus outbreak as lockdowns in countries led to weak consumer spending, causing many liners to cut services.

Spokespeople for Pacific International and Heliconia declined to comment beyond the earlier statement.

The discussions are preliminary though more details could be firmed up in the next few weeks and may still change, the people said. There’s no certainty the talks will lead to a deal, Pacific International said this week.

Besides bank debt, Pacific International has a S$60 million ($42 million) bond that’s maturing November 2020, according to data compiled by Bloomberg. The company had said there are likely to be events of default under its financing agreements including under the terms of the bonds.

It has started discussions with 15 of its lenders and has obtained agreement from holders of 97.6% of its debt to defer repayments for the rest of the year, it said.

Pacific International is the largest shipowner in Southeast Asia operating services in Asia, Middle East and Africa with more than 130 vessels, according to its website. The Singapore company is the world’s 10th biggest container carrier, with 1.5% of the market, according to data from Alphaliner. It has been selling its vessels in the last year as part of its efforts to raise funds to ease some of its financial strains.

Heliconia is best known for its relatively early-stage investments in growth companies from gaming-focused hardware maker Razer Inc. to One Championship - a martial arts-focused media business. Its Chief Executive Derek Lau said in an interview last year the fund had over S$1 billion in assets under management with “significant” dry powder that would be aimed at taking growth companies in Singapore to the global stage.