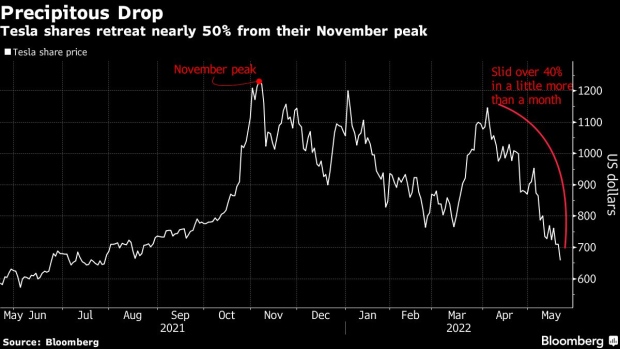 Tesla Inc. vehicles parked in a lot after arriving at a port in Yokohama, Japan, on Monday, Feb. 14, 2022. Japan is scheduled to release trade balance figures on Feb. 17. , Bloomberg

(Bloomberg) -- Tesla Inc. is limping to the finish line, as the stock’s 14% decline this week makes it the second biggest drag on the S&P 500 Index over the past five sessions, behind only Apple Inc.

The issues facing the electric-vehicle maker’s stock are wide ranging. For starters, Tesla’s difficulties in China have become impossible to ignore, with multiple Wall Street analysts this week warning about the country’s disruptions weighing on Tesla’s results. The shares have also been caught up in the growth-stock selloff as investors shun risky assets amid soaring global inflation.

“Tesla is mainly down on two things -- macroeconomic concerns as people are worried about inflation and recession, and China,” Gary Black, founder and managing partner at the actively-managed ETF Future Fund LLC, said in an interview.

Like most automakers, Tesla is facing crippling supply shortages and soaring raw material costs. Though it has been able to navigate the troubles better than most, the latest coronavirus outbreak in China that led to multiple production disruptions at its factory in Shanghai has been damaging to the shares.

Morgan Stanley analyst Adam Jonas warned that the China supply wobble could potentially drive a “substantial” miss on deliveries in the second quarter. Analysts’ average estimate for Tesla’s second-quarter deliveries now stand at around 303,000 units, down 12% from the end of March, according to Bloomberg data. On Thursday, Wedbush analyst Daniel Ives lowered his price target on the stock by 29% to $1000.

“As long as the Twitter deal is out there, and as long as Tesla’s stock is falling, people worry that Musk will have to sell more stock and would get distracted and not pay as much attention to Tesla as he should,” Black said.

Beyond the Twitter headlines, Tesla also was removed from the S&P 500 ESG Index, prompting questions about its position as a key sustainable energy investment. In response, Musk called ESG investing “an outrageous scam.”

Even with the 38% rout in Tesla shares this year, the stock is still among one of the priciest in the NYSE FANG+ Index of megacap technology stocks. It trades at a forward price-to-earnings multiple of 56, compared with the index’s average of 21.

There also are a few things coming that could make Tesla investors optimistic. The company is expected to announce a stock split before its August shareholder meeting, a move that would make its lofty shares more affordable for retail traders and potentially boost its stock price. And earlier this week, Musk said the company’s AI Day event on Aug. 19 will feature a preview of its Optimus robot. A strong response to the technology development could help reverse the negative sentiment.