Tesla Inc. shares rose by double-digits after Elon Musk teased potential for the carmaker to produce 2 million vehicles this year and minimize the effects of drastic price cuts to its electric vehicles.

The EV market leader said it will increase output “as quickly as possible,” in line with its long-standing goal to grow by 50 per centannually over multiple years. While Tesla initially said it expects to make about 1.8 million vehicles this year, Musk said during a call to discuss better-than-expected quarterly earnings that 2 million is possible.

In plowing ahead with expansion, the chief executive officer is countering concerns that consumer interest in Tesla’s cars hasn’t kept up with its rapidly increasing production capacity. A streak of quarterly deliveries that came up short of expectations and Musk’s preoccupation with Twitter Inc. contributed to Tesla’s stock plunging 65 per centlast year.

“Long-term gain for short-term pain” Chris McNally, an analyst at Evercore ISI with an “in-line” rating on the stock, wrote Thursday in a research note. He said investors were buoyed by Musk’s optimistic tone about the company’s outlook.

“The most common questions we’ve been getting from investors is about demand. So I want to put that concern to rest,” Musk said Wednesday on a conference call, adding that Tesla has been taking orders at almost twice the rate of production since it slashed prices two weeks ago. “Demand will be good despite probably a contraction in the automotive market as a whole.”

Tesla has become a bellwether within the global auto sector as its sales grow and much of the industry shifts to EVs. It opened two new plants last year — one near Berlin, and the other in Austin, Texas — and now has four auto factories on three continents. Bloomberg has reported that the company is finalizing plans for facilities in Mexico and Indonesia. 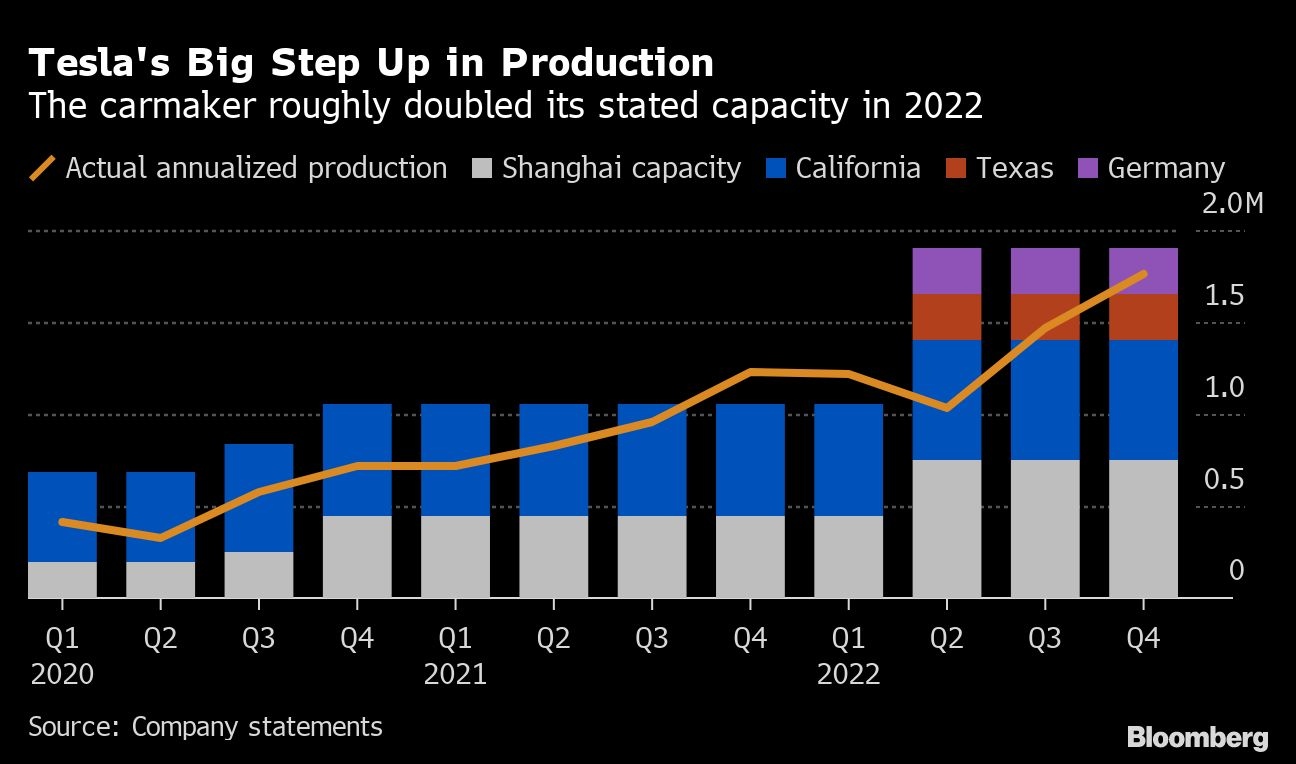 The Austin, Texas-based company reported adjusted earnings of  US$1.19 a share, exceeding the  US$1.12 a share average analyst estimate compiled by Bloomberg.

While Tesla confirmed it remains on track to start building its long-awaited Cybertruck in Austin later this year, Musk cautioned that output will be limited until 2024. That will give rival models including Ford Motor Co.’s F-150 Lightning and Rivian Automotive Inc.’s R1T more time to enjoy their first-mover advantage in the nascent electric pickup market.

Musk is expected to provide details about Tesla’s future product and production plans at an event for analysts on March 1, which is likely to be a major near-term focus for investors following the fourth quarter earnings release.

“The event may include updates on a low-cost vehicle or other production updates such as a new factory location, both of which could be a catalyst for the stock,” Ben Kallo, an analyst at Baird, wrote in a research note.

Tesla’s fourth-quarter revenue rose to  US$24.3 billion, also narrowly beat expectations. Automotive gross margins, however, dipped to 25.9%, below analysts’ average estimate of 28.4 per centand down from 30.6 per centa year earlier.

Chief Financial Officer Zachary Kirkhorn said Tesla expects to maintain an automotive gross margin of at least 20 per centby keeping vehicle prices steady, though he prefaced that forecast by saying there’s “a lot of uncertainty about how the year will unfold.”

The drop in margins to the lowest level since early 2021 comes before Tesla’s recent price cuts, which are likely to depress profitability further, according to Ryan Brinkman, an analyst at J.P. Morgan who has an “underweight” recommendation on the stock. “We view margin trajectory negatively and expect that consensus margin expectations are likely to decline,” he wrote in a research note.

Musk said 2022 was a difficult year due to lockdowns in China, higher borrowing costs and logistical issues. He cast the company’s recent price reductions as necessary to making its cars more affordable to a mass market of buyers, and Kirkhorn listed ways Tesla is looking to make commensurate cost cuts, including by squeezing suppliers.

Income from the sale of regulatory credits — which other automakers buy to offset their vehicle emissions — climbed to  US$467 million last quarter, up 63 per centfrom the prior quarter and 49 per centa year ago. Tesla has said it expects such revenue to shrink over time as competitors launch more EVs to comply with emissions regulations and meet growing demand.

Musk’s exchange with analysts Wednesday was his first since he acquired Twitter for  US$44 billion in late October. His move to fund that acquisition in part by selling Tesla shares has weighed on the stock, which has fallen 53 per centover the past 12 months.

The CEO took umbrage with an investor’s question about how he’s carried himself on Twitter and whether he’s damaged Tesla’s brand, pointing to his more than 127 million followers.

“That suggests that I’m reasonably popular,” Musk said. “I might not be popular by some people, but for the vast majority of people, my follow count speaks for itself.”