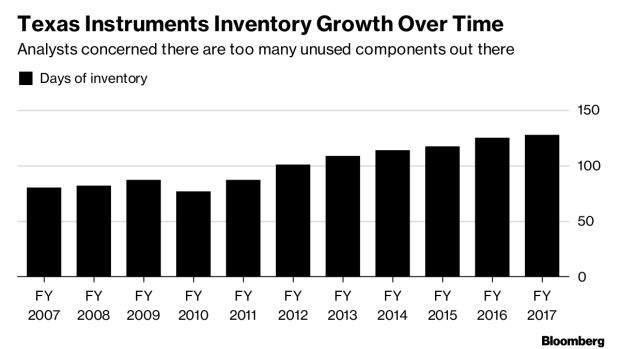 Texas Instruments Inc. gave a quarterly sales forecast that was in line with reduced expectations, calming investor concerns about a collapse in global demand for electronics.

First-quarter profit will be US$1.03 a share to US$1.21 a share on revenue of US$3.34 billion to US$3.62 billion, the Dallas-based company said Wednesday in a statement. On average, analysts predicted earnings of US$1.21 a share and sales of US$3.6 billion, according to data compiled by Bloomberg. The company’s revenue forecast indicates a year-over-year decline of 4.5 per cent to 12 per cent.

Three months ago, the biggest maker of analog semiconductors was one of the first to warn that demand for electronics was cooling after several years of ravenous consumption. Texas Instruments has more products and customers than any other semiconductor company, making its earnings and predictions a proxy for the broader industry. After a couple of years of accumulating components, those customers are now cutting back purchases.

“Clearly we’re seeing some weakness in the market,” Chief Financial Officer Rafael Lizardi said in an interview. “That’s primarily the semiconductor cycle, although the macro environment, specifically the trade tensions, appear to be having an impact and could affect the depth and duration of this downturn.”

Smartphone-related orders were weak, particularly in China, company executives said on a conference call after the results were released. Orders for makers of mobile phone equipment remained strong ahead of the deployment of new 5G cellular networks.

“Most investors were already expecting the first-quarter guidance to be worse,” said Tore Svanberg, an analyst at Stifel Nicolaus & Co.

Texas Instruments shares gained about 1.5 per cent in late trading after the report. Earlier, they closed at US$95.49 in New York. The stock lost 9.5 per cent last year, breaking a run of six consecutive annual gains.

In October, Texas Instruments said it was too early to say whether the U.S.-China trade dispute was hurting demand, or if order reductions were naturally slowing following recent years of torrid chip-industry growth.

The company’s analog chips perform the fundamental task of translating real-world inputs, like sounds and touch, into electronic signals. Unlike Intel Corp. and Qualcomm Inc., Texas Instruments’ semiconductors don’t cost tens of millions of dollars to develop and aren’t typically at risk of becoming obsolete quickly. That means the company is less vulnerable to sudden swings in demand or competitive pressure.

When companies like Texas Instruments report results, analysts and investors look for any accumulation of unsold parts as an indicator of the confidence of customers. Inventory sitting around for months can depress selling prices and if there’s a rebound in demand it delays how that flows into new profits.

Lizardi said inventory may grow, but that situation isn’t as burdensome as in the past. Many of the chipmaker’s most important products have a much longer shelf life and can be sold for as long as 10 years.

The world’s sixth-largest chipmaker reported fourth-quarter net income of US$1.24 billion, or US$1.27 per share, compared with US$344 million, or 34 cents U.S. a share, in the same period a year earlier. Revenue fell about 1 percent to US$3.72 billion. Analysts had estimated a profit of US$1.23 a share on sales of US$3.75 billion. The company reported its first year-over-year revenue decline since the first quarter of 2016.