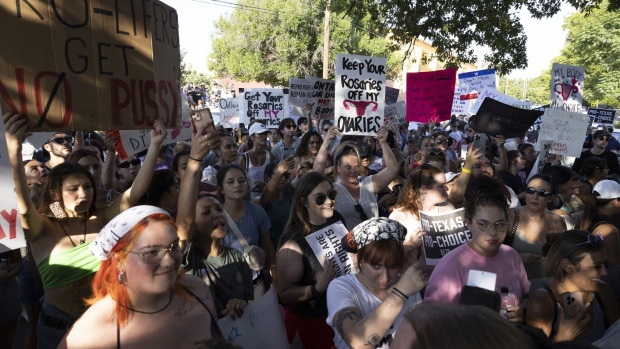 Abortion rights demonstrators during a Rally For Reproductive Freedom in Austin, Texas, US, on Sunday, June 26, 2022. The US Supreme Court overturned the 1973 Roe v. Wade decision and wiped out the constitutional right to abortion, issuing a historic ruling likely to render the procedure largely illegal in half the country and further polarize a deeply divided nation. Photographer: Alex Scott/Bloomberg , Bloomberg

(Bloomberg) -- A Texas judge temporarily sided with pro-abortion rights groups who challenged a state law from the 1920s that would have banned all abortions in the wake of the US Supreme Court’s decision last week to overturn Roe v. Wade.

The judge permitted abortions up to six weeks of pregnancy to resume in Texas for now, according to the Center for Reproductive Rights. The ruling issued Tuesday blocks Texas from bringing criminal charges against doctors, clinics and others who facilitate abortions until the judge determines whether the long-dormant law was resuscitated by the high court.

The lawsuit was filed Monday by the CRR and the American Civil Liberties Union.