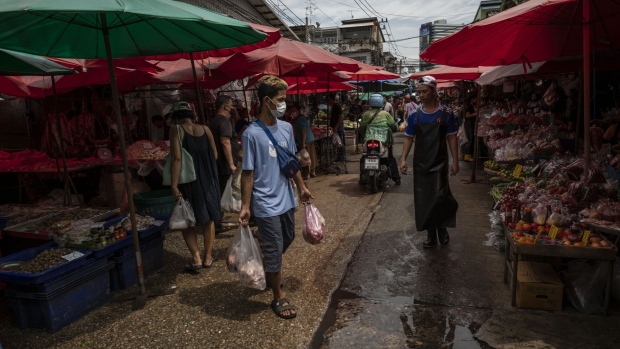 A man carries groceries through a wet market in Bangkok, Thailand, on Saturday, July 2, 2022. Foreign tourist arrivals into Thailand are set to beat official forecasts with the lifting of pandemic-era restrictions, a rare positive for the nation’s Covid-battered economy and currency. , Bloomberg

Core price gains, which strips out volatile food and fuel items, was 3% in July, quickening from 2.51% a month earlier and more than the median 2.63% predicted by economists in a Bloomberg survey, official data showed Friday. The headline inflation rate came in at 7.61% last month, slower than the 8% forecast and a tad below June’s 7.66%.

The higher core CPI print may give the Bank of Thailand the nudge needed to raise rates when its monetary policy panel meets next week. All 15 economists surveyed by Bloomberg as of Friday morning see the BOT lifting the policy rate from a record low of 0.5% to tame inflation, which has stayed above the central bank’s target this year despite billions of dollars spent in state subsidies to ease the cost of living.

“We think the policy rate hike in August is likely a done deal but the decline in headline inflation, amid sharply falling fuel prices, suggests that the risk of aggressive policy tightening is low,” said Charnon Boonnuch, an analyst at Nomura Holdings Inc.

BOT Governor Sethaput Suthiwartnarueput has said rate hikes will be gradual to ensure that higher borrowing cost doesn’t derail the economy’s recovery. A better-than-expected rebound in tourism, that accounted for about a fifth of Thailand’s economy and jobs before the pandemic, may also give room for the central bank to begin policy normalization.

Nomura expects BOT to raise its key rate by 25 basis points on Aug. 10 and follow up with similar hikes in its next three meetings, Charnon said.