Producing the world’s meat has rarely been this expensive.

In southern Calgary, Don Lowe, who’s been a cattle rancher for 40 years, had hoped to expand his herd of 800 beef cows this year, but with feed prices skyrocketing, he’s struggling to hang on to the animals he has. Across the ocean in East Yorkshire, England, pig farmer Kate Moore says the upkeep of her 32,000-strong herd is becoming exceedingly hard.

“It’s horrendous,” said Moore, who is now is chalking up a loss of about £60 (US$75) per animal because of the soaring cost of feeding and taking care of them. “There’s no light at the end of the tunnel at the moment. The British pig industry will never be the same.”

Farmers across the world — with more than 40 billion pigs, cows, buffalo, sheep, goats and poultry — are contending with near-record prices for livestock feed as supplies of grains and soy shrink. Bills for everything from the electricity that keeps their barns well-lit and warm to truckers that haul their animals to abattoirs have also soared. Crop and energy costs surging in the wake of Russia’s war in Ukraine have compounded their woes even as they struggle with everything from droughts curbing grazing lands to bird-flu outbreaks from North America to Europe that wiped out millions of poultry.

Hit from all sides, many farmers are selling livestock or breeding fewer, showing output will be capped in the longer-term. The number of beef cows being slaughtered in the US is the highest since records started in 1986, and those cows not giving birth to calves will result in smaller herds. That means meat prices — already at record highs — won’t fade fast, further weighing on household budgets that are straining under higher costs for other staples and necessities. The United Nations’ Food and Agriculture Organization meat-price index has risen 10 per cent since the beginning of the year, hitting a record in April. In the US, prices of bacon, chicken breasts and ground beef have never been higher.

“A lot of the pressures that we’re facing, the individual pressures themselves are not really new or unusual,” said Justin Sherrard, global animal-protein strategist at Rabobank. “It’s the combination of issue upon issue.”

Russia’s invasion has slowed Ukraine grain exports to a trickle, curbing corn supplies that major hog producers like Spain and China rely on. Feed makes up the bulk of the cost to raise livestock, and even for countries that produce their own, crop prices have scaled dizzying heights. Chicago corn futures have risen 31 per cent this year; Paris corn futures are up 55 per cent and UK feed-wheat futures climbed more than 50 per cent.

“I’ve never seen anything like this,” said Jamie Wyllie, a Scottish pig farmer whose farm typically markets more than 70,000 pigs a year. “Things have been really bad in the pig industry since last year. That means that people, if they had any, have burnt through any reserves.” He’s cutting back his breeding herds to stem the blow. Feed now accounts for 70 per cent of his pig-production costs, up from the usual 60 per cent.

Wholesale pork prices in Britain have risen, but don’t cover production costs, putting farmers on track for an “unprecedented” sixth straight quarter of losses, according to Zoe Davies, chief executive of the UK’s National Pig Association. Pig farmers in the UK were already reeling under labor shortages at meat plants that left more than 100,000 pigs backlogged for slaughter earlier this year. Farmers culled animals as farm space ran out. Just as the situation was improving, Russia’s war erupted.

The conflict “has amplified a whole range of things we were already struggling with,” said Rupert Claxton, meat director at consultant Gira. “It has turned it from being a stress level of seven to a stress level of 10.”

Late last year, the pig herd in Germany shrank to its smallest since 1996, and AMI analyst Tim Koch expects the declines to continue this year. Outbreaks of African swine fever — mainly in wild hogs — brought export restrictions on German pork and depressed prices. After the surge in feed and energy costs, Koch said most pig farmers will need prices at about 2 to 2.40 euros per kilo to be profitable, up from 1.60 to 1.70 in normal times. Prices are just under 2 euros.

“Almost everyone from producers to the slaughter facility is acting really carefully, buying a bit less pigs, trying not to invest too much money right now,” he said. 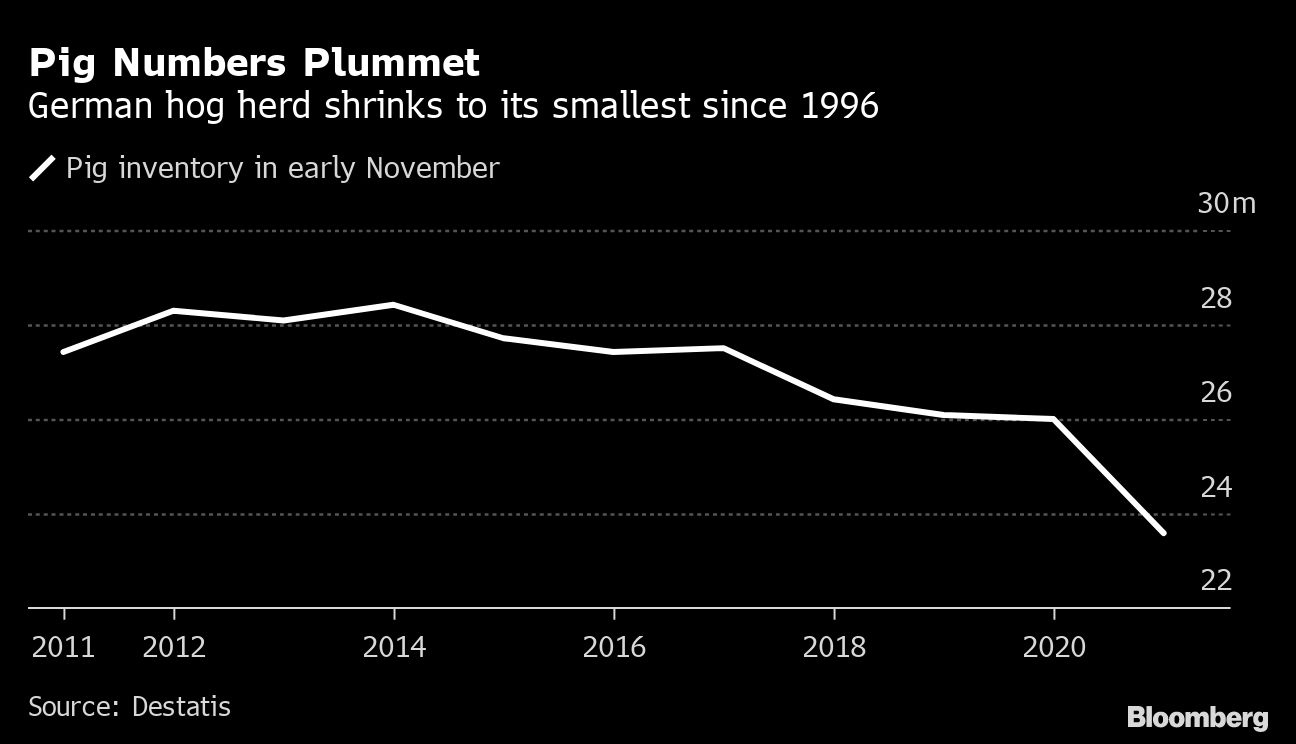 In China, home to half the world’s hogs, record feed expenses and a prolonged slump in pork prices have spurred staggering losses at top hog breeders. After just recovering from a lethal swine fever outbreak, that’s put growth in a downturn again, with sow numbers falling for eight straight months.

Some farms can weather the expenses, but disease and droughts are still taking a toll. An avian influenza sweeping across the Northern Hemisphere killed nearly 38 million birds — mostly turkeys and egg-laying hens — in the US, one of the worst-ever outbreaks. France’s southwestern foie gras region also faced a mass cull for a second year and Polish chicken farms suffered cases.

Bad weather is an added hurdle.  In southern Alberta, drought has scorched pasture grasses and cropland in the past year. With dry weather moving into its third year in some areas, farmers and ranchers have already used any stored feed and drawn on cash reserves, said Reg Schellenberg, the president of the Canadian Cattlemen’s Association.

“There is little feed to purchase and, if it can be found, is extraordinarily expensive,” he said.

Western Canada’s grain output shrank by 40 per cent, driving up the cost of feed and forcing producers to import supplies from the US. The squeeze cost an extra CUS$400 (US$311) in feed per animal over winter, said Jacob Bueckert, chair of the Alberta Cattle Feeders.

“It’s pretty hard right now to be in the cattle business,” he said. “We’re losing from every end. We just don’t have the feed if it doesn’t rain to get through another winter.”

In Argentina, wildfires killed 700,000 cattle in February and March, while pastures across the Pampas farm belt have suffered drought that’s reducing calving and has put the herd on course for a six-year low.

British cattle and sheep, which mainly rely on grazing, won’t have as much forage to last through winter as expensive fertilizer means less will be spread on pasture or hay fields, said Richard Findlay, head of the National Farmers Union beef and lamb board. He expects some farmers will have no option but to cut back herds this year, potentially shrinking cattle numbers 5 per cent or more.

Dairy farmer Joe Healy, with about 100 cows in Galway, on the west coast of Ireland, said fertilizer prices are hitting him hard.

Those rising expenses will make their way to supermarket aisles. 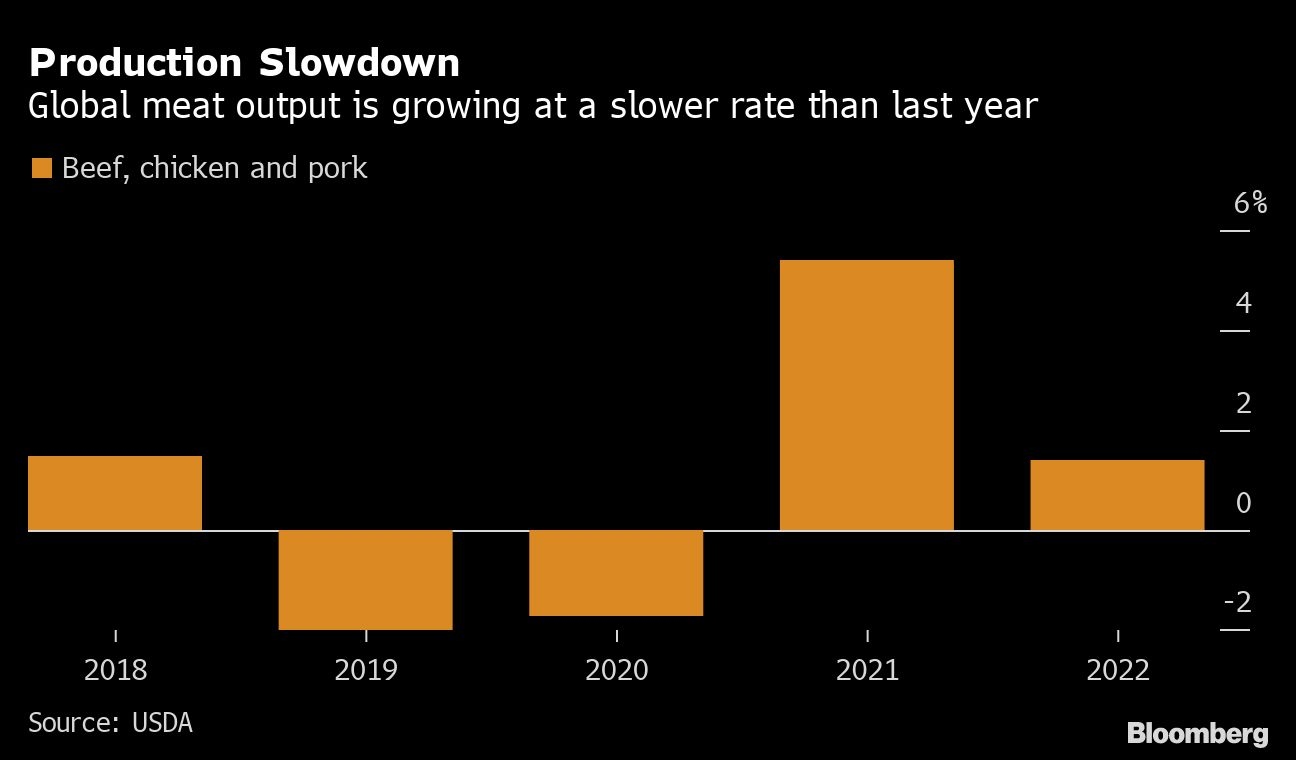