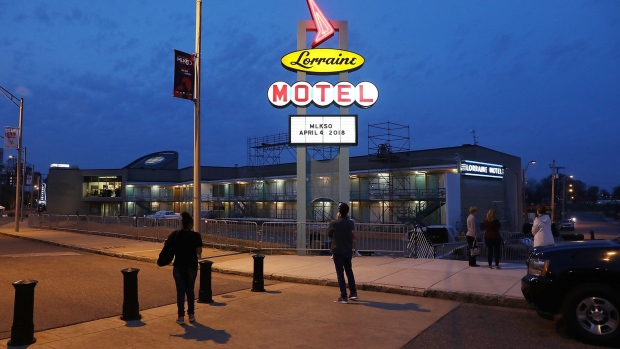 (Bloomberg) -- The Black Lives Matter movement has forced Americans to reckon with the country’s whitewashed history—and its problematic monuments.

In recent weeks, the push to remove statues honoring Confederate leaders has accelerated in response to nationwide protests about police brutality and civil rights. In Richmond, Va., a prominent memorial to General Robert E. Lee along Monument Avenue is slated for removal, and in Manhattan, the American Museum of Natural History will lose the iconic statue at its entrance that depicts President Theodore Roosevelt towering over African and American Indian men.

The National Register of Historic Places contains nearly 100,000 places of significance to U.S. history; according to the New Yorker, only 2% of them reflect the enormous contributions of Black Americans. But though it’s a small percentage, it still amounts to about 2,000 sites to visit from coast to coast, all catalogued geographically through such organizations as BlackPast.org. (These don’t include larger institutions such as the revelatory National Museum of African American History and Culture on the National Mall.) Just like the 30-foot stone depiction of Martin Luther King Jr. that stands along Washington’s iconic Tidal Basin—right near statues of Lincoln and Jefferson—a large number of these homages are inside major cities or within easy driving distance of one. Unlike the more famous effigies, many portray figures of history that are given short shrift in high school textbooks.

That gives road-tripping travelers an incredible, pandemic-proof opportunity: to dig deeper into America’s roots by visiting places that explicitly celebrate the beauty, resilience, and strength of the Black American community.

“The current protest movement has inspired a conversation about the role of history and culture,” says Brent Leggs, director of the African American Cultural Heritage Action Fund, which was founded in 2017 to help preserve Black history sites. As a result, he says, “We're seeing an increased interest by the public to visit and explore African American historic places.”

“A monument isn’t just a way to talk about the past,” adds Jason Anthony Nichols, a senior lecturer at the University of Maryland's African American Studies Department. “It’s a way to inspire the future.” Increasing engagement with these places, he says, is a crucial step in creating a more equitable society.

That doesn’t make it easy. Burial sites, for instance, can be emotionally overwhelming—even when the U.S. isn’t reeling from a pandemic that has killed 160,000 inhabitants.

"It's okay to feel uncomfortable,” says Evita Robinson, founder of Nomadness Travel Tribe, a network for travelers who are Black, indigenous, or people of color (BIPOC). "People just need to take the first step they need to push their ego and privilege to the side and question the things they have known thus far to be true."

Doing so is a rewarding endeavor. It offers valuable perspective, amplifies the contribution of Black Americans, and helps institutions keep the lights on so that others can do the same. “When visitors tour historic sites, they will walk away educated, they will walk away inspired,” says Leggs. “If it shifts national consciousness in a way that helps Americans relate to one another better, we will have done our job."

Here are 10 great anti-racist sites that have responsibly reopened and are worth working into your next great American road trip.

Though better known as a natural marvel, these waterfalls along the border with Canada doubled as a crossing point for freedom seekers and the abolitionists who helped them. That legacy is the subject of a two-year-old museum just north of the typically-tourist-packed Maid of the Mist cruise port, where first-person accounts of soon-to-be-liberated slaves, including some conveyed by Harriett Tubman, are told through historic recreations, E.B. Lewis illustrations, and narrations by actor Keith David.

This spot memorializes the arrival of Union troops on June 19, 1865, in Galveston, Texas, where they informed enslaved Black Americans that they were free. The marker itself is barely more than a large plaque, but it is near 14 historically Black churches that were each founded more than 100 years ago—as well as the Osterman Building at which the Union Army headquartered. Other Juneteenth monuments in the Lone Star state—such as the Texas African American History Memorial in Austin—are more imposing pieces of art, but the Galveston site is awe-inspiring for its geographic importance, as well as its quiet simplicity.

Now operating at 30% capacity through timed entrance tickets, this museum is located in the historic Lorraine Motel, where Martin Luther King Jr. spent his last hours. Its rooms contain exhibits that range from slaves’ oral histories to an old Greyhound bus from Freedom Rider protests in 1961.

This museum in Kansas City, Mo., is accommodating social distancing with reduced hours and limited capacity while still providing a deep dive into baseball’s impact on civil rights. Don’t miss the Field of Legends exhibit, with nearly life-sized bronze statues of notable athletes from the all-Black, six-team division that was founded in 1887.

This statue, honoring America’s first Black military airmen in World War II, is situated on the grounds of Colleton County's Lowcountry Regional Airport in South Carolina, where the namesake troops received flight training before deployment. Pay your tribute, then drive 45 miles east to Charleston, S.C., where the Cigar Factory—the building where We Shall Overcome was first sung in a civil rights protest—has become a multiuse retail destination with restaurants and cafes.

Many influential figures planted roots in this enclave after the Civil War, including Blanche K. Bruce, who survived slavery to become the nation’s first Black senator. The district, with its preserved alleyways, churches, and tightly packed Victorian architecture, is a living museum worth visiting in conjunction with one to the imposing African American Civil War Memorial, a 15-minute walk north.

The first national park site dedicated to a Black American, established in 1943, surrounds George Washington Carver’s birthplace and childhood home. The visitors’ center is closed due to the Covid-19 pandemic, but the 140-acre grounds are open. Find the famous “Boy Carver statue” of the scientist in his youth along the grassy, one-mile Carver Trail.

The oldest surviving Black church building in the U.S. is also one of the country’s oldest symbols of interracial activism; it was inaugurated in 1805 after White Bostonian Baptists helped their Black neighbors finance and oversee its construction. It was home to the city’s first abolition group, as well as the New England Anti-Slavery Society, and even had a blended congregation that stood in opposition to common discrimination practices. Today, it’s part of a 1.5-mile-long Black Heritage Trail in Boston’s Beacon Hill.

What looks like a shrunken log cabin is where one of America’s most influential Black leaders was born—as a slave on the former Burroughs Plantation. The 19th century farm buildings are reconstructions, but a subsistence-style garden remains to evoke what life was like for Booker T. Washington long before he became a symbol of Black education and empowerment.

While it remains named for a Confederate general associated with the Ku Klux Klan, this bridge gained national attention in 1965 when Alabama state troopers beat civil rights protesters led by the late John Lewis, who hailed from Alabama, in an event that later became known as Selma’s Bloody Sunday. As part of a celebration last month of the civil rights icon's life, Lewis’s flag-draped casket was pulled across the bridge by a horse-drawn carriage. For visiting activists, it’s a significant drive-by spot on the 54-mile Selma-to-Montgomery National Historic Trail—and a reminder of the ongoing fight for change, even in places where change was born.